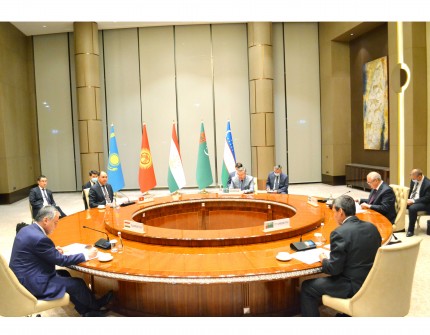 On the 14th of July 2021, upon the initiative of the Turkmen side, the meeting of the Ministers of Foreign Affairs of the states of Central Asia took place in Tashkent. The heads of MFA of Kazakhstan, Tajikistan, Turkmenistan, as well as the First Deputy Foreign Minister of the Kyrgyz Republic have arrived to the capital of the Republic of Uzbekistan to participate to the High Level International Conference “Central and South Asia: Regional Connectivity. Challenges and Opportunities”.

During the comprehensive talks, the parties discussed the most pressing issues of cooperation between the countries of the region in political, trade-economic and cultural-humanitarian spheres.

The main topic of the discussions was the preparation to the Consultative Meeting of the Heads of States of Central Asia, as well as the events of political, economic and humanitarian scope organized in the framework of the Meeting, which is planned to take place in Turkmenistan in August of current year.

The Ministers exchanged views regarding the agenda of the upcoming meeting, as well as discussed the legal-contractual part of the upcoming Consultative Meeting, in particular the documents planned to be adopted.  The organizational and protocol matters were also discussed.

In addition, the Ministers discussed the regional issues and cooperation in the framework of multilateral structures, as well as agreed to work on strengthening the external policy partnership.