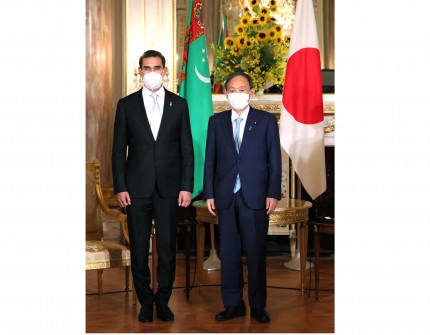 On July 22, 2021, a visit of the delegation of Turkmenistan to Tokyo headed by the Deputy Chairman of the Cabinet of Ministers of Turkmenistan Serdar Berdimuhamedov had started. As is known, the visit was timed to the participation of the national team of Turkmenistan in the XXXII Summer Olympic Games in the capital of Japan – in Tokyo.

On July 24, within the framework of the visit to Tokyo, Deputy Chairman of the Cabinet of Ministers of Turkmenistan Serdar Berdimuhamedov had a meeting with the Prime Minister of Japan Yoshihide Suga.

At the beginning of the meeting the head of the Turkmen delegation conveyed the words of greetings and respect as well as the congratulations of the President of Turkmenistan Gurbanguly Berdimuhamedov to the Prime Minister and the peoples of Japan on the occasion of the beginning of the XXXII Summer Olympic Games.

As is known, during the telephone talk between the President of Turkmenistan Gurbanguly Berdimuhamedov and the Prime Minister of Japan Yoshihide Suga, which took place on 13th of May of the current year, the parties defined the new content of a friendly, confidential Turkmen-Japanese dialogue.

During constructive talks the parties highlighted the timeliness of the meeting where there is an opportunity to discuss the actual issues of the bilateral agenda.

So, the interaction of the two countries on the platform of regional and international structures was considered, the effectiveness of the dialogue “Central Asia + Japan” was especially stated, as well as the importance of a well-established mechanism of bilateral partnership in trade-economic and cultural-humanitarian directions was highlighted.

Especially noting the effectiveness of regular contacts of the representatives of state and private sectors of Turkmenistan and Japan, the sides outlined priorities of interaction on the broad spectrum, aimed at practical implementation of concrete projects in gas, chemical, transport and agricultural spheres. The parties underlined the need of further improvement of the contractual-legal basis of the bilateral cooperation.

The effectiveness of the dialogue through the Joint Committees on Economic Cooperation and Inter-parliamentary Groups of Friendship of two countries was stated.

It was underlined that the open and business discussion of the results and prospective directions of cooperation with the participation of the representatives of the large companies of Japan and the Government members of Turkmenistan, allows to timely resolve the emerging issues and stimulate further progress.

The current and prospective joint projects in the field of energy, industry, healthcare, education, innovations and modern technological solutions were considered in detail.