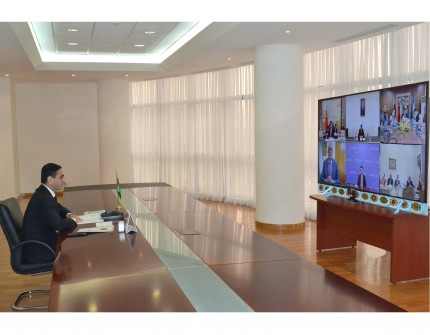 On the 5th of September 2021, a meeting of the Special Representatives of the region’s countries on Afghanistan took place in the format of a videoconference.  The subject matter of the session was the situation in the neighboring country.

The Turkmen delegation at the meeting was represented by the Deputy Minister of Foreign Affairs of Turkmenistan Vepa Hajiyev.

The session was also attended by the Special Representatives on Afghanistan of Iran, China, Pakistan, Tajikistan and Uzbekistan.

During the virtual talk, a comprehensive exchange of views on the current situation in Afghanistan was held, including the efforts of the international community and the region’s countries on expanding the cooperation on the Afghan track.

The Deputy Minister of Foreign Affairs of Turkmenistan Vepa Hajiyev noted the significance of the regional format of collaboration in the consolidation of efforts on resolving the issues of strengthening the stability, security and sustainable development of Afghanistan that are interrelated.

The special role of Turkmenistan in the establishment of peace in Afghanistan by the means of large-scale projects in the socio-economic dimension, energy, transport and communication was underlined.

It was stated that Turkmenistan is always ready and continues to render humanitarian and food aid to the population of the Afghan regions bordering with Turkmenistan.