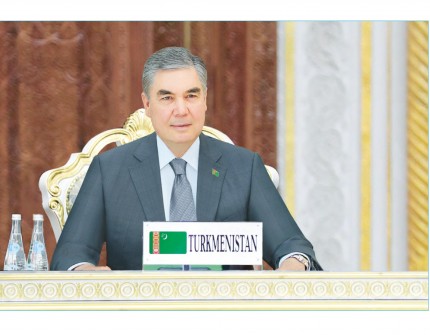 On September 17, 2021, President of Turkmenistan Gurbanguly Berdimuhamedov left on a working visit to the Republic of Tajikistan in order to participate in a meeting of the Council of Heads of States of the Shanghai Cooperation Organization (SCO) as a guest of honor.

Having made a flight to Dushanbe, the presidential airliner landed at the International Airport of the capital of the Republic of Tajikistan, where the officials received the Head of Turkmenistan.

Then the head of Turkmenistan went to the Novruz Palace, which became the venue for the SCO Summit, dedicated to the 20th anniversary of the establishment of the Organization.

Here, the President of the Republic of Tajikistan Emomali Rahmon, who chairs the current meeting of the Council of Heads of SCO Member States, once again cordially greeted President Gurbanguly Berdimuhamedov.

Before the start of the Summit, a ceremony of official joint photographing of the heads of state and delegations took place.

UN Secretary General Antonio Guterres addressed the Summit participants through videoconferencing. The heads of a number of regional organizations, including the CIS, ECO and others, also attended the meeting.

At the end of the official joint photographing ceremony, a meeting of the Council of Heads of State of the SCO member states took place in the Zarandud Hall.

Opening the meeting and warmly welcoming the audience, the President of the Republic of Tajikistan Emomali Rahmon gave the floor to the forum participants.

Speaking at the Summit, President Gurbanguly Berdimuhamedov first thanked the organizers of the current meeting of the SCO Heads of State Council for the invitation to take part in this important and representative meeting as a guest of honor.

Expressing gratitude to the President of the Republic of Tajikistan Emomali Rahmon for the hospitality and warm welcome, cordiality and excellent organization of the Summit, the Head of Turkmenistan also sincerely congratulated all the participants on the anniversary of the Organization. Over the past 20 years, the leader of the nation noted, it has turned into a large, authoritative interstate association that has received well-deserved recognition and respect in the world, which has a powerful constructive impact on the course and nature of global political and economic development.

For Turkmenistan, relations with the SCO are an important area of ​​the strategy of international partnership, which is based on a commitment to a broad geographic and structural diversification of our external relations, President Gurbanguly Berdimuhamedov emphasized.

The leader of the nation expressed confidence that the establishment of multifaceted, systematic, purposeful cooperation between Turkmenistan and the SCO can give new powerful impulses for development, promote a dynamic and high-quality course of political, economic, social, humanitarian processes throughout Eurasia.

Concluding his speech, President Gurbanguly Berdimuhamedov confirmed the readiness of our country for constructive joint work.

At the end of the program of his working visit to the Republic of Tajikistan, the Head of Turkmenistan went to the International Airport of the city of Dushanbe, from where he left for homeland.