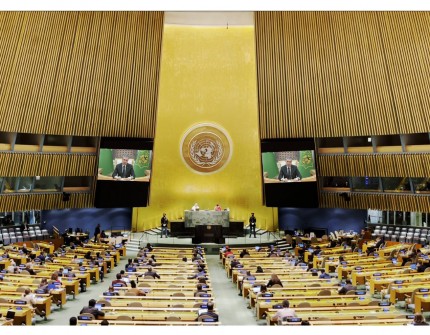 Today, on September 22, President of Turkmenistan Gurbanguly Berdimuhamedov made a video address to the participants of the 76th session of the United Nations General Assembly.

In his speech the Head of Turkmenistan defined the priorities of interaction of the world community on the platform of a global organization – the UN.

It was especially emphasized that the subject of trust and dialogue culture initiated this year should be the focus of global attention and become permanent element of the UN strategic agenda.

It was also noted the need of activation of multilateral interaction along the line of scientific diplomacy. In this context, the President of Turkmenistan called on the world community to close consolidation of efforts directed at combating a dangerous novel infection and mitigating the socio-economic consequences caused by its spread. In this regard, it was underlined the significance of the active work to recover and strengthen resilience of the international transport systems in the face of emergencies.

Concerning Afghan issues, the President of Turkmenistan told that our country has been and remains deeply interested in political stability and security in Afghanistan, the well-being and unity of fraternal Afghan people. In this context, it was also stated that Turkmenistan is ready to contribute to the solving of global task connected with the migration policy.

“We express our firm commitment to cooperate with the United Nations, actively participate in and contribute to its political and diplomatic efforts to preserve and strengthen the existing architecture of global security, overcome the consequences of the pandemic, and implement plans and programs in the economic, social, environmental, humanitarian and other fields” – said the President of Turkmenistan.