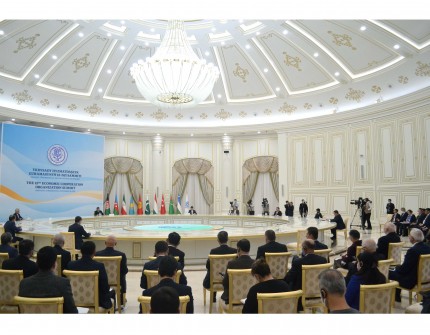 On November 29, 2021, in the “Garagum” hotel of Turkmen capital there was organized a briefing dedicated to the results of the 15th Summit of Economic Cooperation Organization.

At the beginning of the event ECO Secretary General presented a special ECO award to the Chief Researcher of the Institute of Language, Literature and National Manuscripts named after Magtymguly of the Academy of Sciences of Turkmenistan Yazklych Orazklychev in the category of “History, Culture, Literature and Fine Arts”.

The Minister of Foreign Affairs of Turkmenistan Rashid Meredov opened the event with introductory speech. Then, ECO Secretary General Khusrav Noziri made his remarks. The heads of the diplomatic missions of the ECO member-countries in Turkmenistan made their presentations. In addition, UN Resident Coordinator in Turkmenistan, Ambassador Extraordinary and Plenipotentiary of the European Union to Turkmenistan, and the Head of the OSCE Centre in Ashgabat made their speeches at the briefing.

Turkmenistan being a member of the ECO makes an invaluable contribution in the expansion of the cooperation on the economic field and enhances friendly relations in the framework of the ECO. It was underlined, that Turkmenistan during the period of its chairmanship in the Organization in 2021 carried out active and meaningful work in accordance with the prepared Concept of the chairmanship.

It was noted that within the framework of the Summit the agreement was reached about a significant acceleration of the pace of cooperation in all fields of mutual interest aimed at of transforming the ECO into a dynamic and effective regional economic structure, in which priority attention will be given to the cooperation in transport and energy.

As was mentioned, the agreements and decisions reached during the 15th Summit of the ECO are capable to give powerful innovative and quality impulse to our cooperation, give it consistency and specificity, and create the prerequisites for accelerated integration both in the ECO space and in the context of interregional and continental processes.