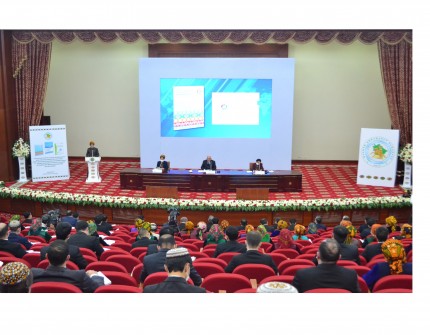 On January 21, 2022, a conference dedicated to the publication of the books “Interview given by the President of Turkmenistan Gurbanguly Berdimuhamedov to the international mass media”, “Consultative Meeting of the Heads of States of Central Asia” and “The 15th Summit of the Economic Cooperation Organization” was held at the Magtymguly Turkmen State University.

At the beginning of the conference, the Deputy Chairman of the Cabinet of Ministers, President of the Academy of Sciences of Turkmenistan S. Toylyev delivered an introductory speech.

During the conference, the significance of a number of international events held in Turkmenistan last year, which are another confirmation of the great international authority of Turkmenistan and the recognition of the enormous potential of its foreign policy and the legal status of permanent neutrality as an effective mechanism for strengthening global peace, sustainable development and global security were discussed.

As is known, on the occasion of the 30th anniversary of Independence of Turkmenistan, President Gurbanguly Berdimuhamedov gave several interviews, in particular, to the journalist of the “Mir” Interstate Television and Radio Company, to the First Deputy Director General of the TASS news agency Mikhail Gusman and to the editor-in-chief of the TRT World TV channel of the Turkish State Television and Radio Company Yusuf Erim. In these interviews, the Head of State spoke about the prospects for regional and international cooperation in various formats. In addition, President Gurbanguly Berdimuhamedov noted the priorities of the state policy of Turkmenistan, where special attention was paid to the preservation of the primordial values ​​of the nation and their relationship with modernity.

The speakers emphasized the historical significance of the Consultative Meeting of the Heads of States of Central Asia in strengthening and developing relations between the countries of Central Asia. It was noted that this meeting made it possible to comprehensively consider promising areas and mechanisms for further development of regional mutually beneficial cooperation.

In particular, it was stated that Turkmenistan, being a member of the ECO, makes an invaluable contribution to the expansion of cooperation in the economic direction and builds up friendly relations within the organization. It was emphasized that our country, during its ECO Presidency for 2021, carried out active and meaningful work in accordance with the Developed Concept of Chairmanship.

At the end of the event, the participants adopted an Address to the President of Turkmenistan Gurbanguly Berdimuhamedov.