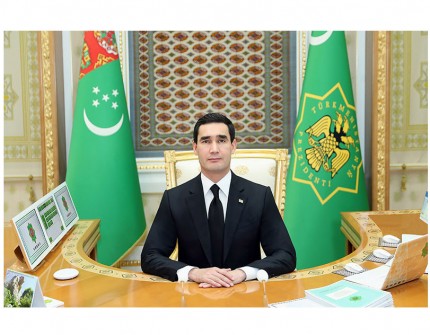 On July 1, 2022, President Serdar Berdimuhamedov received Vice President of the Republic of Türkiye Fuat Oktay, who is the co-chairman of the Intergovernmental Turkmen-Turkish Commission on Economic Cooperation and arrived in Ashgabat at the head of his country's delegation to participate in the regular meeting of this commission.

Expressing gratitude for the opportunity of a personal meeting, the guest conveyed heartfelt greetings and a written message from Turkish President Recep Tayyip Erdogan to the head of state, as well as an invitation to visit the Republic of Türkiye.

Thanking for the kind words, President Serdar Berdimuhamedov addressed warm greetings to the President of the Republic of Türkiye, stating with satisfaction the high level of the traditionally friendly interstate dialogue, which is dynamically developing both in bilateral and multilateral formats, within the framework of authoritative regional and international organizations.

In continuation of the meeting, the head of state and his guest exchanged views on the prospects for the Turkmen-Turkish partnership, which has a solid potential. In this context, the significant role of the Intergovernmental Commission was noted, whose activities are aimed at building up productive trade and economic ties, implementing the agreements reached, identifying new relevant areas of interaction, entering new joint projects.

At the end of the meeting, President of Turkmenistan Serdar Berdimuhamedov and Vice President of the Republic of Türkiye Fuat Oktay expressed confidence that the traditionally friendly interstate cooperation would continue to develop successfully on a mutually beneficial long-term basis, filled with new concrete content.