Meeting with the Minister of Energy of Iran 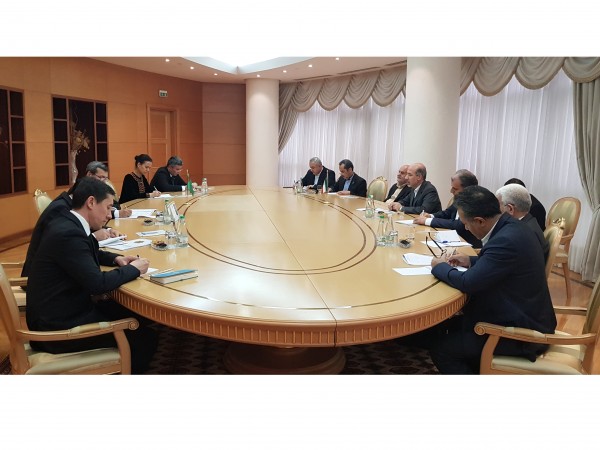 On November 30, 2022, in the Turkmen Foreign ministry the Minister of Foreign Affairs of Turkmenistan Rashid Meredov held a meeting with the Iranian delegation headed by the Minister of Energy of the Islamic Republic of Iran Ali Akbar Mehrabian.

At the beginning of the meeting, the head of the Iranian delegation noted that in course of the visit were held meaningful meetings with the esteemed President of Turkmenistan, as well as in the Government of Turkmenistan, during which a wide range of issues of Turkmen-Iranian cooperation was discussed.

The parties stressed the importance of high-level meetings, in particular, a constructive and trusting dialogue between the Presidents of Turkmenistan and Iran in the development of bilateral friendly relations.

Attention was paid to the activities of the intergovernmental Turkmen-Iranian commission for economic cooperation. In this regard, ways of developing cooperation in the electric power sector, promising areas in the oil and gas industry, issues of interaction in the water sphere and the environment, including the joint rational use of water resources, were discussed.

While discussing the development of trade and economic cooperation, the positive dynamics of the growth of trade between the countries was stated. In this context, the parties noted the importance of giving impetus to increasing the volume of mutual trade, aimed at further realization of the existing solid potential.

During the negotiations, the results of the visit of the Iranian delegation to Turkmenistan were considered, as well as plans for the future were outlined.