12th meeting of the Intergovernmental Turkmen-Russian Commission on Economic Cooperation 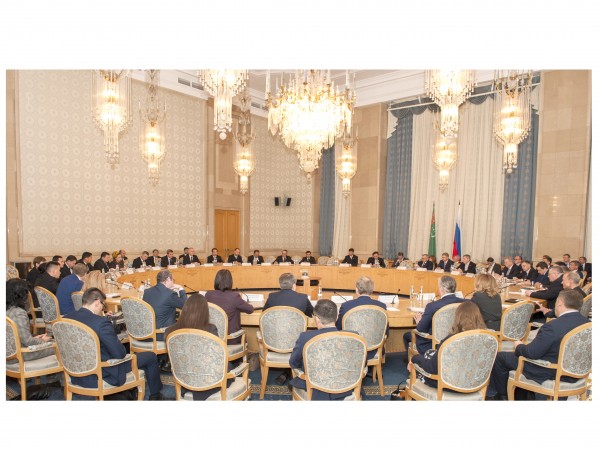 On December 7, 2022, the 12th meeting of the Intergovernmental Turkmen-Russian Commission on Economic Cooperation was held in Moscow under the chairmanship of Deputy Chairman of the Cabinet of Ministers, Minister of Foreign Affairs of Turkmenistan Rashid Meredov and Deputy Prime Minister of the Russian Federation Alexei Overchuk.

During the meeting, a thorough exchange of views took place on the progress and prospects of the Turkmen-Russian trade and economic cooperation. It was emphasized that in recent years it has been given a strong impetus to that cooperation, and today it is developing especially dynamically and consistently, on a mutually beneficial and equal basis.

The talks confirmed the mutual interest in expanding partnership in various fields and entering new promising areas. Among them, such areas as the fuel and energy complex, transport, industry, agriculture, construction, healthcare, and a number of other areas were named as priorities. Due attention was paid to the development of cultural and humanitarian interaction.

The heads of delegations noted the existence of a significant potential for saturating and enriching the entire bilateral complex of cooperation on a long-term basis, in accordance with the instructions of the Presidents of the two countries and the logic of strategic partnership relations between Turkmenistan and the Russian Federation.

As a result of the two-day visit of the delegation of Turkmenistan to Russia, 15 bilateral documents were signed, including the Program of Cooperation between the Ministries of Foreign Affairs of Turkmenistan and the Russian Federation for 2023-2024, as well as agreements in the economic, scientific, technical and humanitarian spheres.

Within the framework of the visit, a number of meetings were held between the relevant ministries and state agencies of the two countries.