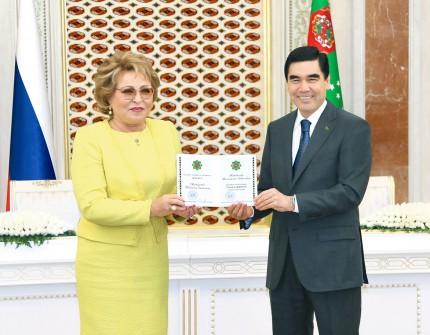 On September 16, 2017, President of Turkmenistan Gurbanguly Berdimuhamedov received the Chairman of the Federation Council of the Russian Federation, Valentina Matvienko, who arrived in Ashgabat to participate in the opening ceremony of the 5th Asian Indoor and Martial Arts Games.

During the meeting, the sides discussed the state and prospects of bilateral cooperation in the political, trade-economic and cultural-humanitarian spheres. The Speaker of the Federation Council of Russia highly appreciated the peacekeeping policy of neutral Turkmenistan, which is carrying out international initiatives aimed at strengthening security and stability in the region. "Russia sees Turkmenistan as a reliable strategic partner, who plays a huge positive role in ensuring stability in Central Asia," Matvienko said.

Then President Gurbanguly Berdimuhamedov signed a decree on conferring the title of "Honorary Citizen of the City of Ashgabat" to Valentina Matviyenko and handed her the appropriate certificate.

The head of state noted that this honorary title was conferred on Valentina Matvienko for her special services in strengthening friendly relations between Turkmenistan and the Russian Federation, expanding political, economic, cultural and humanitarian cooperation between the two states.

The Speaker of the Federation Council of Russia thanked the President of Turkmenistan for the honor. "I visit many countries and cities and I want to say absolutely sincerely that Ashgabat is one of the most beautiful, well-conditioned, cleanest cities in the world," Valentina Matviyenko said.

In conclusion, she handed over to the President of Turkmenistan a memorable symbolic gift - an olive branch, in which, in ancient Greece, where the Olympic movement was born, the winners of the competitions were awarded.