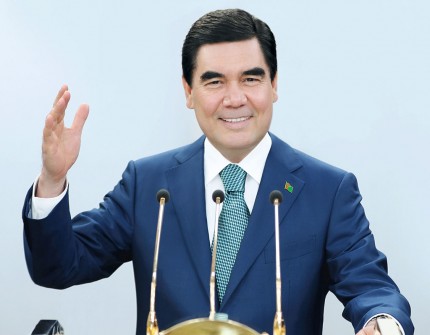 On September 17, 2017 in Ashgabat with the participation of the President of Turkmenistan Gurbanguly Berdimuhamedov, heads of states and governments of several countries, prominent foreign figures, heads of international organizations and other honorary guests, the official opening ceremony of the 5th Asian Indoor and Martial Arts Games was held.

In the second half of the day, the head of state arrived at the building of the Chamber of Commerce and Industry of Turkmenistan, where participants of the current celebrations gathered. In the lobby of the CCIT, the President of Turkmenistan welcomed the heads of all the delegations of the state level who arrived in the capital to participate in the opening ceremony of the Games "Ashgabat 2017".

After mutual greetings, the Turkmen leader was photographed with each of them and invited distinguished guests to the VIP-hall. Then an official reception was given on behalf of His Excellency the President of Turkmenistan on the occasion of the opening ceremony of the 5th Asian Indoor and Martial Arts Games.

From the Chamber of Commerce and Industry, the joint motorcade of the President of Turkmenistan and heads of state delegations headed to the Olympic town. Here, before the VIP-entrance to the Olympic Stadium, an official ceremony of photographing the high participants of the celebration took place.

The official part began. Presenters in Turkmen and English languages ​​welcomed the audience and congratulated the President of Turkmenistan Gurbanguly Berdimuhamedov, the entire Turkmen people and the participants of the celebration with the opening of the Games.

The State Flag of Turkmenistan solemnly takes to the stadium. Then the flag of the Olympic Council of Asia is taken in. The spectators welcome President Gurbanguly Berdimuhamedov with a long, stormy applause and he addressed the heads of states, leaders and members of delegations, guests and participants of the Games, all compatriots with a welcoming speech.

The green Flag of Turkmenistan rises under the melody of the National Anthem over the stadium. Then the floor is given to the President of the Olympic Council of Asia Sheikh Ahmad Al-Fahad Al Sabah, who began his speech by expressing gratitude to President Gurbanguly Berdimuhamedov, heads of other states and high-ranking guests from different countries, heads of sports federations, national Olympic committees, all athletes and spectators.

A white banner with the OCA logo is hoisted to the flagpole.

Then President Gurbanguly Berdimuhamedov gave his blessing to the Games "Ashgabat 2017" and struck the bell.

After a colorful and multidimensional composition that presented the history and modern development of Turkmenistan, the inscription "Welcome!" appeared on the central monitor, and everything around was illuminated with green light. In the arena, a light beam paved a wide white path. Presenters announced the beginning of the parade of athletes.

The youth opened the procession with Alabai, which became the image of the Games "Ashgabat 2017". Next, the boys carried two puppies of this breed. Behind them, in alphabetical order, were teams of 64 countries in Asia and Oceania, as well as a team of refugees, the first time taking part in the Asian Games. Athletes are welcomed by numerous fans and spectators. The country-hostess of the Asian Games-Turkmenistan closes the parade.

Soon a rider with the torch of the Games "Ashkhabad 2017" entered the stadium. Women in the ancient tradition, blessing a good beginning, lit a juzarlik in the bowls - a medicinal herb, the smoke of which is considered purifying and bringing success.

From the center of the arena grows a tower, and a rider with a torch directs the horse up the stairs to its top. Lifting the stallion to the hind legs, he takes out the torch fire to an octagonal star, from which two "comets" flare up on it, which immediately shot up to a bowl, erected over the head of a giant horse that adorns the dome of the Olympic stadium. In the chalice, the Fire of the 5th Asian Indoor and Martial Arts Games was lit. The final of the grandiose celebration was a festive salute that thundered over the capital.