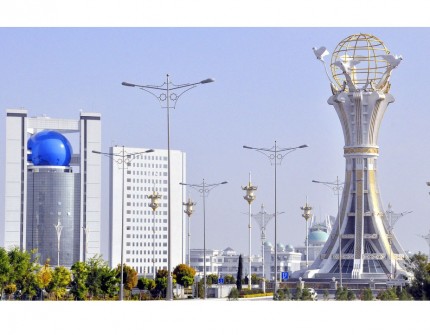 On September 18, 2017 at the Ministry of Foreign Affairs there was a meeting on the adoption at the 36th session of the UN Human Rights Council of the Declaration on the Encouragement of valuable contribution of the Refugees Olympic teams to consolidation of peace and human rights. Turkmen diplomats, political scientists, representatives of public organizations, mass media, teachers and students of higher educational institutions took part in the meeting.

The fact that Turkmenistan was the initiator of the adoption of this particularly important Declaration at the level of the United Nations has once again vividly demonstrated to the world community the ever growing role of our country in solving global humanitarian issues of our time. Speaking about the prospects for cooperation of our country with the relevant authoritative structures, the speakers noted the need to develop proposals aimed at promoting this meaningful humane initiative of the Turkmen side.

Introducing the participants of the meeting with the main provisions of the Declaration, the rapporteurs noted that the document underscored the importance of the participation of the refugee team in sports events designed to draw the attention of the international community to the scale of the current refugee crisis and raise awareness of the need to address this problem. In this regard, the importance of President Gurbanguly Berdimuhamedov's initiative to invite the refugee national team to participate in the 5th Asian Games was stressed. This fact is considered as a means of combating all forms of discrimination and promoting peace, sustainable development and human rights.

As underscored in the operative reports on this matter by the world media, the high-level document of the UN Human Rights Council, initiated by the President of Turkmenistan, was supported by many foreign governmental and international experts in the field of human rights.

As noted by all speakers, the adoption of the Declaration on the “Encouragement of valuable contribution of the Olympic teams of refugees to consolidation of peace and human rights” on the initiative of the President of Turkmenistan at the 36th session of the United Nations Human Rights Council is another evidence of the high international prestige of our country.