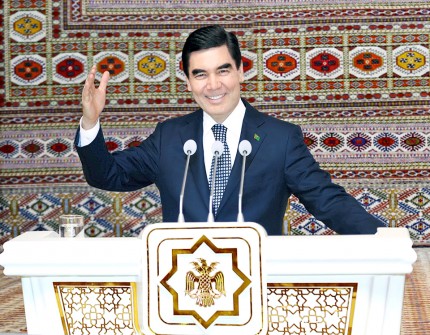 On 9 October 2017 in Ahal Velayat under the chairmanship of the President Gurbanguly Berdimuhamedov began its work the regular meeting of the Council of Elders of Turkmenistan. The forum addressed the important issues of further comprehensive development of the country, implementation of progressive socio-economic and democratic transformations and reforms.

The members of the Government, heads of the Mejlis, ministries and departments, military and law enforcement agencies, political parties and public organizations, mayors of provinces, cities and districts, deputies of the national parliament, employees of different sectors of the national economy and representatives of science, culture were among the delegates of the Council of Elders. The Turkmen diplomats and heads of diplomatic missions and international organizations accredited in Turkmenistan, representatives of foreign business circles, local and foreign media were also invited to the forum.

During his speech at the Council of Elders, the President of Turkmenistan noting the "Concept of foreign policy course of Neutral Turkmenistan for 2017 – 2023" paid a special attention to the importance that Turkmenistan attaches to consolidation and steadfast development of political, economic and cultural relations with the major international structures as well as with different countries of the world.  The Head of the State has reminded that the UN General Assembly announced December 12 as International Neutrality Day and on April 19, 2017, our country was elected to the Executive Council of the UN Children Fund for 2018 – 2020 as well as to the Commission on the Status of Women for 2018 – 2020.

President Gurbanguly Berdimuhamedov also noted that at the 72nd session of the UN General Assembly, our country has proposed comprehensive approach to provision of global cyber security.

Stressing that at a recent meeting of the Cabinet of Ministers dedicated to the results of 9 months of the current year, were considered indicators of economic development of the country, President Gurbanguly Berdimuhamedov focused the attention on the main issues undertaken by the state strategy.

Today, all branches of the national economy are being reformed. A solid foundation has been laid for dozens of important sources of the country's economic development. Due to the systematic implementation of these measures the formation of a reliable foundation of a powerful industrial, social and engineering infrastructure ensuring a stable growth of the economy continues. "Today, we can fully confirm that in our country reach the dynamic growth of a powerful, modern, socially oriented economic sector, which is based on various forms of ownership and provides for the phased transition to market relations", - The Head of Turkmenistan highlighted.

Summing up the results of the discussions, the President of Turkmenistan thanked all those who spoke on the agenda of the national forum and noted that all the proposals that were announced today will be taken into account.

On 10 October, the second - the final day of the regular meeting of the Council of Elders of Turkmenistan. During the forum, the priority tasks of further comprehensive development of the country were determined, and drafts of separate documents were considered.

At the meeting, the Address of the Council of Elders of Turkmenistan to the people of the country was adopted.

Concluding the consideration of the issues on the agenda of the national forum, the Head of State addressed the delegates of the forum with a closing remarks, thanked them for their active participation in the discussion and declared the meeting of the Council of Elders closed.