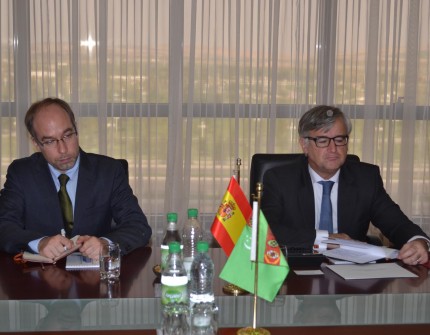 On October 30, 2017 at the Ministry of Foreign Affairs there was a meeting with the new Ambassador Extraordinary and Plenipotentiary of the Kingdom of Spain to Turkmenistan, Mr. Ignacio Ibáñez (with residence in Moscow), who arrived in Ashgabat on a working visit.

During the meeting, speaking of the trusting relations between Turkmenistan and Spain, the parties noted the important role of the high-level meetings. Expressing the intention to increase all-round cooperation and readiness for joint work on their further activation, the sides exchanged views on issues of bringing bilateral relations to a new level by expanding cooperation between the foreign ministries of the two countries. The sides made proposals on developing cooperation on a wide range of areas, among which were areas of economy, energy and technology. The parties also paid attention to the issues of interaction in the fields of transport and communications.

The Spanish side noted the role of Turkmenistan's positive neutrality in ensuring peace in the region and expressed interest in participating in the VII Ministerial Conference on Regional Economic Cooperation for Afghanistan (RECCAVII), which will be held on November 14-15, 2017 in Ashgabat.

The Turkmen side also notified the Ambassador about the Ministerial Conference of the Energy Charter, chaired by Turkmenistan, in Ashgabat this November, which will serve as a platform for discussing energy issues.

During the meeting, Ambassador Extraordinary and Plenipotentiary of the Kingdom of Spain in Turkmenistan presented copies of his credentials.