Negotiations between the Ministers of Foreign Affairs of Turkmenistan and India 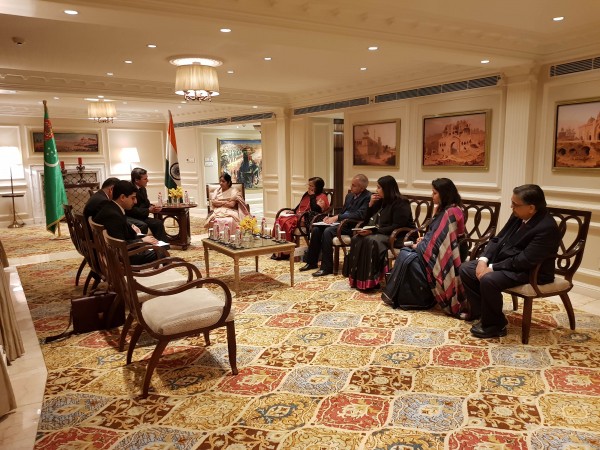 On January 16, 2018, as part of his short-term visit to India, the Deputy Chairman of the Cabinet of Ministers, Minister of Foreign Affairs of Turkmenistan R. Meredov met in New Delhi with the Minister of External Affairs of the Republic of India Sushma Swaraj.

Thanking the External Affairs Minister of India for organizing this meeting in a short time, R. Meredov briefly described the ongoing diversified activities of the President of Turkmenistan Gurbanguly Berdimuhamedov on the practical implementation of TAPI project and the attraction of appropriate financial resources from major donors, both private and public.

The parties discussed the need to hold the next ministerial meeting within the framework of the TAPI Steering Committee in the shortest possible time. The Turkmen delegation also said that in connection with the transition of TAPI to the active implementation phase, the Indian side should consider the issue of creating a representative office of TAPI Project Ltd. in New Delhi for prompt resolution of emerging issues.

At the end of the meeting, the head of the Turkmen delegation presented to the Minister of External Affairs of India Sushma Svaraj with the invitation of President of Turkmenistan Gurbanguly Berdimuhamedov to the President of India Ram Nath Covind to take part in the solemn events on February 23 related to the launch of the construction of the next stage of the Turkmenistan-Afghanistan-Pakistan-India (TAPI) gas pipeline, the transmission line Turkmenistan-Afghanistan-Pakistan and the opening of a new railway along the route Serhetabat-Turgundi. The Indian minister accepted the message and assured that the letter would be delivered to the high addressee.