The prospects of Turkmen-British business cooperation were discussed in London 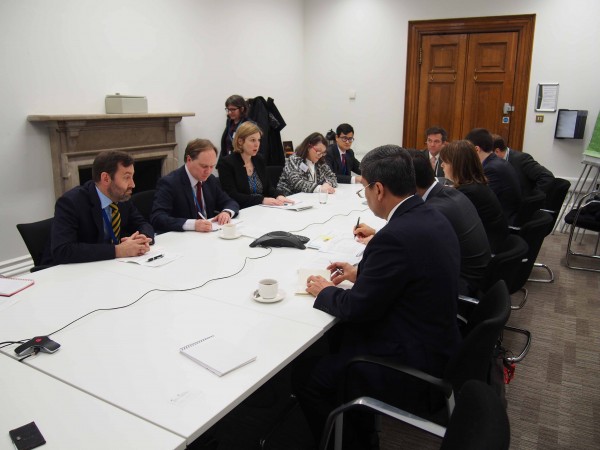 On January 21-23, 2018, under the instructions of the President of Turkmenistan Gurbanguly Berdimuhamedov, the Turkmen delegation paid a working visit to London for the next round of bilateral political consultations and participation in the sixth meeting of the Turkmen-British Trade and Industry Council.

On January 21, the Deputy Foreign Minister of Turkmenistan met with the Minister of State for European and Americas Affairs at the Foreign and Commonwealth Office Sir Alan Duncan.

During the meeting, noting the presence of interest in expanding bilateral relations in the political, economic and humanitarian spheres, the sides stressed that in this context an important role is assigned to such effective forms of bilateral relations as the meetings of the Turkmen-British Trade and Industry Council and political consultations. At the same time, the Turkmen side, noting the need for humanitarian cooperation on an integrated basis, expressed its readiness to hold regular talks on issues of mutual interest.

The representative of the British side noted that at present the UK is undergoing a period of great transformations and that this visit is a good opportunity for bringing the relations in the sphere of trade and investment to a qualitatively new level.

On January 22, 2018 during the sixth meeting of the Turkmen-British Trade and Industry Council Minister of Finance and Economics of Turkmenistan B. Bazarov made a presentation. In his speech, he briefed on important areas of development of Turkmenistan's economy, development plans for the short and medium term and on the country's policy in attracting investments. It was noted that the policy of economic diversification, building up its export potential, ensuring stable development and reaching the level of developed countries under the leadership of the President of Turkmenistan Gurbanguly Berdimuhamedov promotes a gradual transition of Turkmenistan to a market economy.

The permanent deputy minister and the head of the diplomatic service of the British Foreign and Commonwealth Office Sir Simon MacDonald, in turn, noted the fuel and energy and industrial sectors, the engineering industry, banking and financial institutions, as well as services, education and experience exchange as sectors that promote the development of bilateral cooperation.

In his speech, Deputy Foreign Minister of Turkmenistan V. Hajiyev noted that regional and international fuel and energy initiatives, initiatives in the field of transport and communications, as well as regional integration initiatives of Turkmenistan take an important place in attracting foreign investors. He stressed that these initiatives play an important role in ensuring sustainable development and in increasing the attraction of investments not only in the country, but also in the Central Asian region.

The Deputy Minister of Foreign Affairs of Turkmenistan held a meeting at the Royal United Services Institute (RUSI), during which representatives of this Institute were informed of the main foreign policy initiatives of Turkmenistan in the areas of energy security and transport.

In the afternoon, bilateral political consultations were held at the Foreign and Commonwealth Office of the United Kingdom. During the consultations, noting the good neighborly relations implemented by Turkmenistan as a permanent neutral state and projects for sustainable development, which are the main pillar of peace in the Central Asian region, the sides stressed that such large projects as the Turkmenistan-Afghanistan-Pakistan-India gas pipeline and transport-transit corridors "Lapis Lazuli" in the future will make a great contribution to sustainable development and to the integration of the region with other parts of the world. In addition, an exchange of views on issues of stability and regional security took place.

Then the Minister of Finance and Economy of Turkmenistan B. Bazarov and the Deputy Minister of Foreign Affairs of Turkmenistan V. Hajiyev met with the State Minister for Trade Policy of Great Britain Greg Hands. During the meeting, the sides exchanged views on the development of bilateral cooperation in the fields of trade and investment.

In the evening, an official reception was held in the building of the official receptions of the Ministry of Foreign Affairs and Commonwealth of Great Britain in honor of the delegation of Turkmenistan, and in the House of Lords of the Parliament of Great Britain an official dinner was given on behalf of the Trade Envoy of the British Prime Minister for Turkmenistan, Baroness Emma Nicholson.