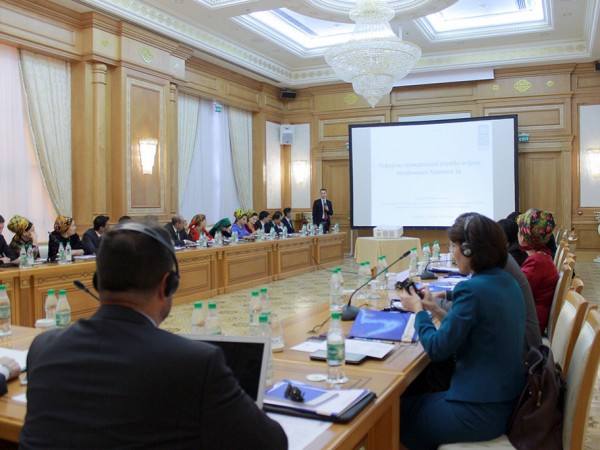 On January 25, 2018, the Academy of Civil Service under the President of Turkmenistan hosted a meeting of the Council for the Management of the Joint Project of the Academy and the United Nations Development Program. At the meeting, the results of the project's implementation in 2017 were considered, and priority areas for cooperation with UNDP in 2018 were identified.

As is known, the project, designed for 2017-2019, is aimed at rendering assistance in such areas as working out the plans for the development of the Academy of Civil Service, updating curricula taking into account the priorities of the country's social and economic development, expanding cooperation with the leading schools of public administration in foreign countries of Asia, Europe and the CIS.

During the discussion of the results of the work for 2017, the participants of the meeting noted that, in the face of growing global competition, the modernization of the management system of state and municipal employees is a strategic direction. Another important aspect of the educational process of the Academy of Civil Service is the improvement of personnel technologies in the public administration system, since the adoption of managerial decisions directly depends on the competence of the specialists participating in their development.

The implementation of the joint project with UNDP will allow the Academy of Civil Service under the President of Turkmenistan to develop educational programs aimed at stimulating innovative thinking of civil servants, increasing their leadership potential, as well as systemic training of managerial personnel in the socio-political and economic sphere, forming a new generation of teachers oriented on interactive methods of work, with research and creative skills.