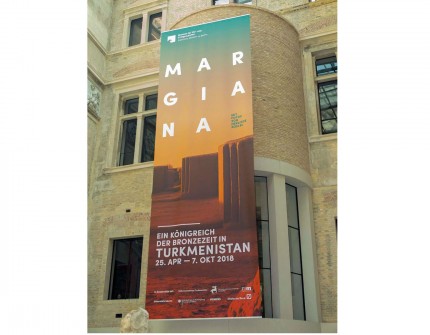 The exhibition "Margiana - the Kingdom of the Bronze Age on the Territory of Turkmenistan" opened in the New Museum on the famous Museum Island in the center of Berlin. The exhibits from the museum collections of our country for the first time are presented abroad. This became possible thanks to the support of President Gurbanguly Berdimuhamedov and the adoption of the “Law on the Protection, import and export of movable values ​​of the national historical and cultural heritage”, which came into force two years ago.

The exhibition, held under the motto "Turkmenistan - the heart of the Great Silk Road" announced in our country, provides an opportunity for numerous foreign visitors to get acquainted with artifacts that testify to a long period of history when international contacts between individual Eastern kingdoms were just beginning.

Visible evidence was obtained by archaeologists during the many years of excavations on the territory of ancient Margiana. These priceless finds, once hidden under the earth, are now exhibits of several museums in Turkmenistan, and houses, the royal palace and sanctuaries around it have become the objects of the State Historical and Cultural Reserve "Ancient Merv".

Archaeological collections of the State Museum of the State Cultural Center of Turkmenistan, the Museum of Fine Arts of the country and the Mary Museum of Local History give an idea of ​​the level of development of art in one of the earliest centers of the world civilization, the center of which was the huge fortified settlement Gonurdepe, now located on the territory of the Karakum etrap of Mary velayat. In the 21st century, the ancient country of Margush becomes one of the bright symbols of the inextricable connection of times, the succession of generations and the universal value of the world cultural heritage.

The exhibition will last until October 15 and after Berlin will be presented in two more German cities. Within four months, with its exposition, it will be possible to get acquainted at the Archaeological Museum of Hamburg, and then, until June 2019, at the Rice-Engelhorn Museum Complex in Mannheim.

Especially for this event a colorful catalog was published, intended for both scientists and a wide circle of history lovers, who will see the originals from the truly fantastic ancient Turkmen kingdom.