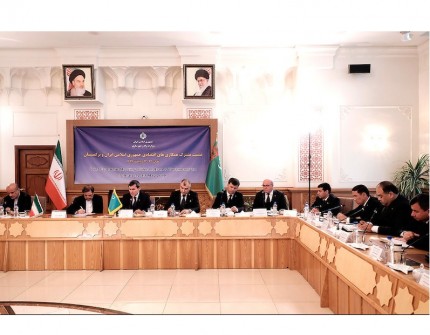 On 12-13 May 2018, the delegation of Turkmenistan headed by the Deputy Chairman of the Cabinet of Ministers, Minister of Foreign Affairs R. Meredov paid a working visit to the Islamic Republic of Iran.

Upon arrival in Tehran, the delegation of Turkmenistan had a meeting with the Minister of Roads and Urban Construction, the head of the Iranian part of the joint Turkmen-Iranian Intergovernmental Commission for Economic Cooperation, Abbas Ahmad Akhundi. The sides exchanged views on new directions to increase the volume of mutual trade turnover, more efficient use of cross-border trade opportunities and development of cooperation in the transport sector. The sides also discussed the possibility of holding a regular meeting of the Intergovernmental Commission on Economic Cooperation in Turkmenistan in the near future.

During the visit, the delegation of Turkmenistan was received by the President of the Islamic Republic of Iran, Hassan Ruhani. At the meeting, issues of expanding practical cooperation between the two countries, identifying new directions and joint implementation of promising projects aimed at strengthening partnership on the strategic directions of cooperation were discussed. It was noted that the official visit of the President of the Islamic Republic of Iran to Turkmenistan, held on March 27-28 this year, gave a powerful impetus to the development of bilateral cooperation between the two countries, filling the relationship with new content, reflected in a solid package of signed documents.

Then a meeting was held with the Minister of Foreign Affairs of the Islamic Republic of Iran, Mohammad Javad Zarif. During the meeting, the sides discussed the current state and prospects for the development of relations between Turkmenistan and Iran in the political, trade-economic and cultural-humanitarian spheres. In addition, the parties exchanged views on a wide range of important issues on the international and regional agenda, which are of mutual interest.

On May 13, the delegation of Turkmenistan held talks with Iranian Oil Minister Bijan Namdar Zangene. Discussing the prospects for further expansion of the Turkmen-Iranian cooperation in the fuel and energy sector, the parties paid attention to strengthening cooperation in the oil, gas and petrochemical industries.

After that meeting, the Turkmen delegation was received by Ali Ardashiri Larijani, Chairman of the Islamic Shura of the Islamic Republic of Iran. During the talks, having noted the high level of interstate relations, the sides exchanged views on the state and prospects of bilateral cooperation. Among the priority areas, along with the strengthening of the inter-parliamentary dialogue, were mutually beneficial partnership in the field of transport and the development of fruitful humanitarian contacts between the two friendly countries.

During the talks, the parties discussed topical issues of interstate cooperation, underscored the mutual interest of the parties in the further development of the established dialogue in the trade, economic and transport spheres, the fuel and energy sector and water management. As a result of the talks, the sides signed two protocols on cooperation in the energy sector and in the field of railway transport.