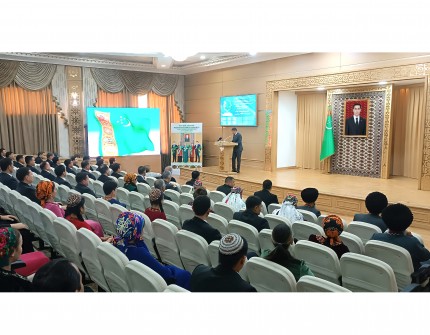 During the ceremony, which personified highly humanistic traditions, the speakers noted that in Independent and Permanently Neutral Turkmenistan, caring for people is a priority issue and all opportunities have been created for citizens to live a free, peaceful and prosperous life. Endless concern for people extends not only to the country's own citizens, but also to those who, for various reasons, do not have citizenship and want to connect their lives with this land.

On the basis of the principles of permanent neutrality, Turkmenistan carries out important and exemplary work on the issues of refugees and stateless persons on the basis of international organizations. This is confirmed by the number of people who have received citizenship of the country in recent years. Based on the humanitarian decrees of the esteemed President, thousands of stateless persons permanently residing in the country have become citizens of Turkmenistan.

During the celebration of the 31st anniversary of the Independence of our country, according to the Decree signed by the esteemed President, the citizens of Turkmenistan became 1530 people - representatives of 26 nationalities permanently residing in Turkmenistan. In addition, according to the Decree of the President of the country, residence permits in Turkmenistan were issued to 315 foreign citizens from 9 states and representatives of 23 nationalities.

This event demonstrated unaltered commitment of our country to the norms of international humanitarian law, which became one more example of efficient decision of issues of migration policy.