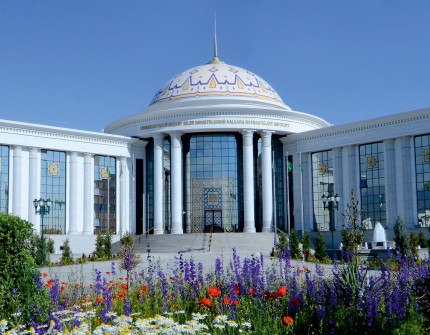 On March 20, 2008, Gurbanguly Berdimuhamedov issued a Decree on the establishment of the Institute of International Relations of the Ministry of Foreign Affairs of Turkmenistan. The main aim of the Institute is to train highly-educated specialists for the diplomatic service of our country.

On December 29, 2009, our Esteemed President signed the Decree on the construction of complex of new buildings of the Institute of International Relations of the Ministry of Foreign Affairs of Turkmenistan. The complex was built by the French construction company “Bouygues Batiman International”.  On September 1, 2011, the opening ceremony of the new buildings took place with the participation of our highly Esteemed President Gurbanguly Berdimuhamedov.

The Institute includes the main building, academic corps, dormitory and sport complex. The main building includes the Rector`s office and lecture-rooms for 250 students. Archives, a doctor's room and engineering staff's room are on the ground floor.

The museum, “Revival” room, students' administration, offices of the Institute's social organizations and the library of the German language are located on the first floor.

The assembly hall for 500 people is on the first floor too. This floor also includes a legal hall for 100 people and another conference hall for 200 people.

Building for the students of International Journalism and International Economic Relations is located in the west part of the campus. There are an archives, tennis hall, dining-hall and canteen on the ground floor.

The two fountains, beautiful walkways and pavements, neat green areas located in front of the main building and gives special attraction to the whole complex of buildings. In general, the new building complex of the Institute of International Relations of the Ministry of Foreign Affairs attaches a peculiar beauty to the architectural view of the urban development of the capital. All this is another evidence of constant attention and paternal care of the Esteemed President of the country in establishing the national Alma-Mater of Turkmen diplomacy and its development.

Address of the Institute:

A library equipped with the most state-of-the-art   technology is under the service of lecturers and students of the Institute. The library fund is constantly replenished with books of the Book Center “Vival” of the Ministry of Education of Turkmenistan, the number of which currently makes 12,000.

Representatives of the UN agencies, the OSCE Center in Turkmenistan presented educational literature on international relations, human rights, international journalism and other publications to the library. The library is also augmented by literature presented by ambassadors of various foreign countries during their visits to the Institute.

Printed and electronic versions of lectures on all subjects written in accor-dance with the curricula are available in the library. There is an access to the electronic samples of textbooks and manuals published by the Ministry of Education of Turkmenistan. In-depth scientific works of our highly Esteemed President occupies special place in the library of the Institute. The latest publications of the country are under the service of the reader. The students have an access to the latest technology of the library. All materials in the library are converted to soft copies, electronic catalogues are formed and e-library is launched.

LIBRARY OF THE GERMAN LANGUAGE

Books and videos, special literature about the history, culture, customs, traditions and holidays of Germany occupy special place in the library. Students can improve their knowledge use hardware can find information they need at the library.

THE MUSEUM OF THE HISTORY OF TURKMEN DIPLOMACY

A museum of the history of the Turkmen diplomacy is on the ground floor of the main building of the Institute. The bookshelves of the library include such diplomatic documents, as a thank you letter to the ruler of the Turkmen state Kunyaurgench Atsyz to the Caliph of Baghdad Muktefi Liemrillyu as a sign of deep respect, a congratulatory letter of Mustanjitu Billyani on the occasion of his accession to the throne of the Caliphate, a copy of a letter of instructions addressed to the Vizier of the Shirvani state.

Photographs telling about the era of Oguz Khan, the history of the city-states of Altyn-Depe, Ancient Margush, the Ancient Parthian state, the Seljuk Empire, the Ancient Turkmen State Kunyaurgench are on the walls of the museum. The museums has been enriched by materials that tell about specific moments of the high level meetings of the Esteemed President of Turkmenistan Gurbanguly Berdimu-hamedov with the heads of states and governments during official, state and working visits abroad.

Numerous research papers and books of the Turkmen leader as well as materials that indicate the conferment of honorary titles to the Head of State, diplomas and other high awards are in the museum.

The museum has books, speeches, reports on the foreign policy of the state by the Esteemed President, magazines “Foreign Policy and Diplomacy of Turkmenistan” and some other.

INTERNATIONAL COLLABORATION OF THE INSTITUTE

The inclusion of teachers and students of our institute into the composition of official foreign delegations headed by the President of Turkmenistan has become a tradition. Thus, teachers and students of the Institute, being a member of the official delegation of the President of Turkmenistan, attended the opening ceremony of the exhibition “EXPO – 2010” in Shanghai of China, during state visits to China (2012, 2014), Turkey (2012), Armenia (2012), Moldova (2013), Kazakhstan (2013), Japan (2013).

In November 2014, the head of the Republic of Turkey, Rejep Tayyip Erdogan, who, by the decision of the Supreme Certifying Commission of Turkmenistan, was awarded the title of Honorary Professor of the Institute of International Relations of the Ministry of Foreign Affairs of Turkmenistan.

When we talk about Turkmen-Turkish cooperation it is important to mention about the library on international relations in Turkish and English languages, which was opened on the eve of “Knowledge and Students' Day” on the first of September, 2015. This library will contribute to the students of our Institute in getting more education according their speciality.

In the Institute all necessary conditions have been created for students' study and leisure as well as for arranging various activities after classes.

In their spare time students are involved in literary activities, scientific-research works and organize creative meetings with outstanding journalists, writers. A student music and dance ensemble functions at the Institute. It performs at different festivities held in the country. A national group of dutarists consisting of male students actively performs national music and songs at cultural events held at the Institute.The students of the Institute take an active part in an annual competition called Talyp Joshguny, which is conducted among higher educational institutions of the country. In addition, amateur clubs of different specialties operate at the Institute.

Students take part in the clubs and are engaged in scientific-creative work on their interested topics related to their specialties. Within the framework of these clubs, along with scientific-research work, students organize different educa-tional activities. They are arranged by holding competitions among them in different fields of scien-ce. Moreover, the students of the Institute participate in scientific conferences, competitions held in other higher educational institutions of the country.

All conditions for living and rest have been created in the students' dor-mitory for 248 students. It is well-equipped with all modern conveniences, including air-conditioning, heating system, laundry and kitchens.

In the room “Revival” there are books by the Esteemed President and periodicals acquainting readers with the most important events in the country and abroad, where you can review them independently.

The Institute of International Relations has created all conditions to promote health and improve sport skills of students. A modern sport building located near the academic building allows students to engage in sports, participate in competitions in various sports. The sport complex includes a sport hall designed for 300 spectators, a gym for 30 persons, as well as facilities for table games.

A sport club “Alem” regularly participates in sport competitions among higher educational institutions and conducts similar competitions at the Institute. Students organize regular trips to the Health Path. Students often organize competitions in volleyball, football by inviting their peers from other higher educational institutions to games. The students of the Institute take an active part in the sport movement with the motto: “Turkmenistan is a country of spiritual development and a healthy lifestyle.”