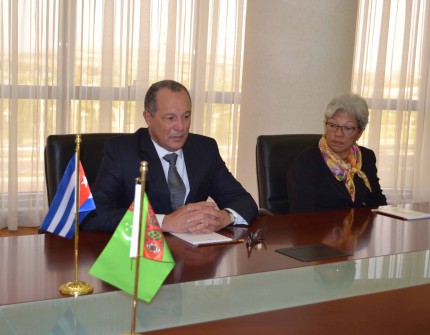 On November 6, 2018, the meeting at the Ministry of Foreign Affairs of Turkmenistan was held with Cuban delegation headed by Alfredo Nieves Portoundo, Ambassador Extraordinary and Plenipotentiary of the Republic of Cuba in Turkmenistan, who arrived in Ashgabat on a working visit.

At the beginning of the meeting the parties have exchanged views on priority areas of cooperation within the UN. The sides noted that constant support to each other’s initiatives was given within the framework of the UN.

Trade and economic relations between the two states were also discussed during the meeting. The parties considered the proposals to organize meetings between business communities of Turkmenistan and Cuba in order to further expand existing relations.

Furthermore, the participants have discussed matters on developing cooperation in cultural-humanitarian field, tourism as well as, health care and sports.