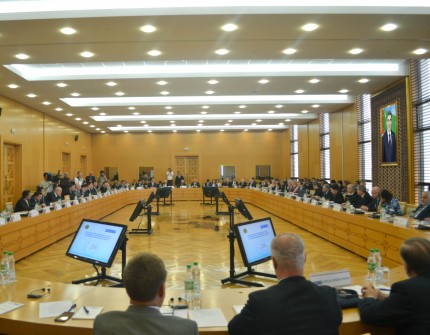 On April 16, 2019, a conference was held at the Ministry of Foreign Affairs of Turkmenistan dedicated to the 20th anniversary of the opening of the OSCE Center in Ashgabat.

In his opening remarks, the Deputy Chairman of the Cabinet of Ministers, Minister of Foreign Affairs of Turkmenistan R. Meredov congratulated the guests on the 20th anniversary of the opening in Turkmenistan of the Organization for Security and Cooperation in Europe Center in Turkmenistan and conveyed the wishes of the successful work of the Conference from President of Turkmenistan Gurbanguly Berdimuhamedov.

Noting the importance of many years of effective cooperation between Turkmenistan and the OSCE, the Minister spoke about the specific work done over the past years, taking into account political, environmental and geopolitical aspects. The current projects aimed at promoting peace, stability and security at the global and regional level were noted.

Then the floor was given to the OSCE Secretary General Thomas Greminger, who thanked the Turkmen side for assistance in organizing such an important event and noted the versatility and effectiveness of cooperation between the OSCE and Turkmenistan for 20 years.

Further, priority areas of the OSCE were noted within the framework of the Chairmanship of the Slovak Republic in 2019.

During the presentations, the participants noted the need for further expansion of co-operation between the OSCE participating States for a timely response to the challenges and threats of our time.