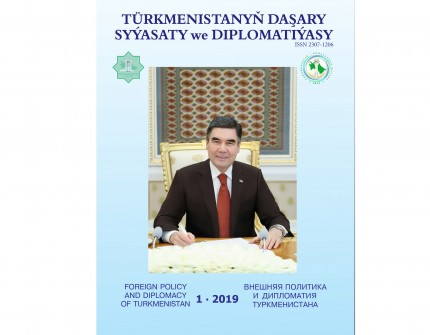 This year’s first issue of the quarterly scientific-practical magazine “Foreign Policy and Diplomacy of Turkmenistan” prepared by the Ministry of Foreign Affairs of Turkmenistan has been published.

The interview devoted to the 20th anniversary of the activities of the OSCE Center in Ashgabat is of particular interest to readers. In addition, the magazine contains articles by Ambassadors of foreign countries accredited in Turkmenistan on bilateral relations between countries.

Also, on the pages of the magazine, readers will be able to get acquainted with the articles on foreign economic policy of Turkmenistan, on gender equality, transit transport projects implemented by neutral Turkmenistan.

The column “The Chronicle of Diplomatic Life” provides an overview of the meetings and negotiations at various levels, meetings of joint intergovernmental commissions, political consultations between the Ministries of Foreign Affairs, as well as international meetings and conferences held in Ashgabat and in various countries.

The publication of the magazine in Turkmen, Russian and English makes it accessible to a wide range of readers in foreign countries.