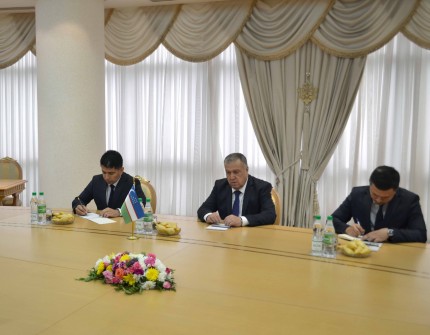 On the 15th of May 2019, a meeting was held between the Minister of Foreign Affairs of Turkmenistan and the Minister of Culture of the Republic of Uzbekistan Bakhtiyor Sayfullayev, who has arrived to Ashgabat to participate in the work of the XIV Forum of Creative and Scientific Intelligentsia of the CIS.

During the meeting, the parties noted with satisfaction the high level of cooperation between the two brotherly countries in different areas, particularly the issues of developing the cultural-humanitarian ties were discussed.  The guest noted that during many years various events, including forums, exhibitions and educational trips with participation of the workers of culture and art of Turkmenistan and Uzbekistan are being successfully realized.  Also, the parties discussed future projects and proposals on further strengthening of joint activities.

During the meeting, the guest also stressed the high organizational level of the XIV Forum of Creative and Scientific Intelligentsia of the CIS and underlined that Turkmenistan makes a valuable contribution to the development of cooperation between the states-participants of the CIS.