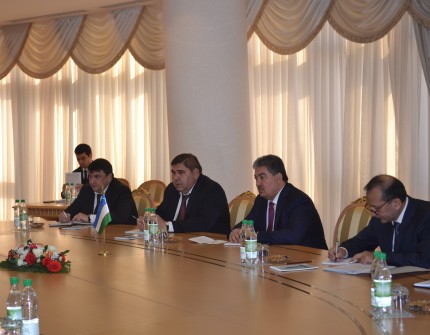 On January 25, 2017 Minister of Foreign Affairs of Turkmenistan received a delegation of Uzbekistan headed by the First Vice-Premier of the Republic of Uzbekistan, the Chairman of the Board of JSC "Uzbekistan Temir Yullari" Mr. Achilbai Ramatov, who arrived in Ashgabat on a working visit.

During the meeting, the sides exchanged views on bilateral interaction. Speaking about the high level of cooperation between Turkmenistan and Uzbekistan, the sides noted the strategic nature of the partnership; suggestions were made to further develop the Turkmen-Uzbek cooperation in political, trade-economic and cultural-humanitarian spheres.

The talks covered a wide range of issues of mutual interest. The parties expressed their commitment to the further development of regional and international cooperation, including within the framework of international organizations.

At the end of the meeting the sides noted the importance of regular political consultations between the foreign ministries of the two countries to further improve and expand the dialogue on a mutually beneficial basis.