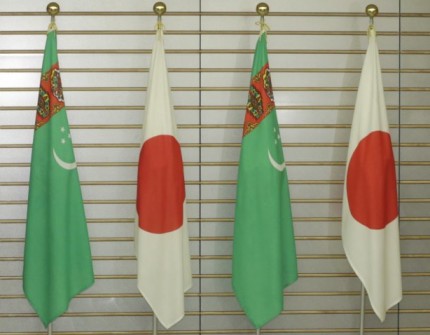 On October 23, 2019, in the morning in Tokyo, President of Turkmenistan Gurbanguly Berdimuhamedov met with the leaders of major Japanese companies. The meeting was held in the format of a working breakfast at the Chinzanso Tokyo Hotel.

The meeting was attended by the leaders of such well-known corporations as ITOCHU, Sojitz, Mitsubishi, Kawasaki Heavy Industries, etc., as well as representatives of the Turkmen side represented by some members of the government, heads of some ministries and departments, and representatives of the Union of Industrialists and Entrepreneurs.

In his welcoming speech, the head of state noted the successful experience in implementing various projects in Turkmenistan with the participation of Japanese companies and the ongoing preparation of new joint projects in the field of industrial and technological infrastructure development.

The head of state outlined the essence of the new economic strategy of Turkmenistan, the main content of which is the creation of an industrial society in the country. This, in turn, involves the construction of new high-tech and high-tech enterprises. In this context, such areas as the oil and gas industry, electric power industry, transport and communications, water management, and the textile complex were highlighted.

At the same time, the head of state drew special attention of businessmen to the fact that our state will continue to provide the Japanese companies and financial institutions with the necessary support in carrying out their activities in Turkmenistan.

A separate topic of discussion was the possibility of establishing direct ties between entrepreneurs of the two countries, actively drawing on the experience of the largest companies in Japan, in particular in the field of organizing and managing a business, creating highly profitable industries, and training highly qualified personnel.

During the breakfast, which was held in an atmosphere of business and open communication, an exchange of views took place on the prospects and ways of intensifying long-term partnerships in the fuel and energy sector, trade and economic sphere, chemical industry, transport, agriculture and water recourses and other equally important areas of joint application interests.