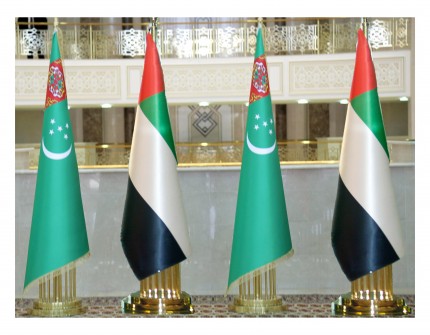 Having warmly greeted each other, Turkmen leader and the Crown Prince of Abu Dhabi exchanged congratulation on Eid Al Adha, having addressed wishes of wealth and prosperity to fraternal people of two countries.

The sides have stated with delight that traditionally friendly relations between Turkmenistan and the United Arab Emirates are steadily developed distinguishing by high level of understanding and close cooperation in political and diplomatic, trade and economic, cultural and humanitarian spheres.

Perspectives of interstate relations, which are built on the principles of mutual respect, have been discussed in the telephone conversation. In this regard, special attention has been paid to realization of agreements reached earlier including the agreements between the Foreign Ministries, as well as to diversification of the partnership in different spheres, development of new forms of active cooperation.

The President of Turkmenistan and the Crown Prince of Abu Dhabi have also shared the opinions on the problem of regional and global level,

In the end of the conversation, having expressed the confidence that interstate dialog would continue based on trust, transparency and understanding, President Gurbanguly Berdimuhamedov and Crown Prince of Abu Dhabi, Deputy Supreme Commander of the Armed Forces of the UAE Sheikh Mohammed Bin Zayed Al Nahayn wishes of strong health and success in all beginnings to each other and peace and prosperity to the nations of two countries.