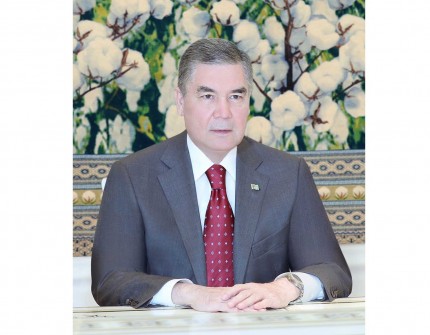 On September 10, 2020, President of Turkmenistan Gurbanguly Berdimuhamedov received the newly appointed Ambassador Extraordinary and Plenipotentiary of the Republic of India to Turkmenistan Vidhu Peethambaran Nair, who presented his credentials to the Head of state.

Expressing deep gratitude for the time allotted for the audience, the diplomat conveyed the warm words of greetings to the Turkmen leader from the President of the Republic of India Ram Nath Kovind and Prime Minister Narendra Modi, who confirmed their readiness to intensify the constructive Turkmen-Indian dialogue.

The President of Turkmenistan addressed reciprocal best wishes to the top leadership of the friendly country and, congratulating the diplomat on his appointment to a responsible position, wished him great success in his noble mission aimed at intensifying mutually beneficial partnership, which is successfully developing on a bilateral and multilateral basis, including within the framework of major international organizations and structures.

Within the framework of the meeting, an interested exchange of views took place on key aspects of interstate relations, the strengthening of which is directly served by the established trusting Turkmen-Indian dialogue at the highest level, as well as the proximity or coincidence of the positions of the two countries on a number of significant areas of the international and regional agenda.
In this context, the urgency of the initiatives of President of Turkmenistan Gurbanguly Berdimuhamedov to create international transport and transit corridors and ensure global energy security was emphasized.

A separate topic of the meeting was the discussion of the possibilities of increasing the pace of the implementation of the project for the construction of the Turkmenistan-Afghanistan-Pakistan-India (TAPI) transnational gas pipeline, which, as the Turkmen leader noted, is aimed at reviving the Great Silk Road in a new format, improving the well-being of the peoples of Southeast Asia.

Having noted with satisfaction the high dynamics of the development of interstate dialogue, which has been continuing all these years, the head of state and the plenipotentiary of the friendly country emphasized the importance of the Intergovernmental Turkmen-Indian Commission on Trade, Economic, Scientific and Technological Cooperation.

The importance of further intensifying humanitarian exchange in order to study the historical and cultural heritage of the Turkmen and Indian peoples was emphasized. The prospects of partnership in the scientific and educational sphere, the field of information technology were also noted.

Expressing gratitude to President Gurbanguly Berdimuhamedov for the active attention to the issues of Turkmen-Indian cooperation, the diplomat assured that he would in every way contribute to the strengthening of interstate relations.