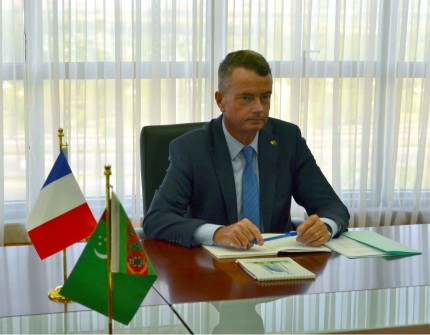 On September 11, 2020, the Minister of Foreign Affairs of Turkmenistan R.Meredov had a meeting with the Ambassador Extraordinary and Plenipotentiary of France to Turkmenistan, Mr. Francois Delaus, who is completing his diplomatic mission in the country.

At the beginning of the meeting, the Turkmen side expressed gratitude to the Ambassador for his personal contribution to the development of Turkmen-French relations and productive work in various areas of interaction. The Ambassador of France, in turn, thanked the leadership of our country for the created opportunities for work and comprehensive assistance to the activities of the Embassy.

During the meeting, the parties emphasized the strengthening of the political and diplomatic dialogue. Positive experience of interaction on international platforms was also discussed.

The parties also discussed the issue of expanding trade and economic cooperation between the two countries, as well as issues of cooperation in the field of construction, agriculture, archeology and communications.

Also, the cultural-humanitarian collaboration was discussed, including the projects on the promotion of Turkmen historical legacy. The importance of cooperation in the area of education was noted.

At the end of the meeting, the Ambassador once again expressed gratitude the Government of Turkmenistan and to the Ministry of Foreign Affairs and for all-round support and assistance in the implementation of his diplomatic mission in Turkmenistan, aimed at strengthening mutually beneficial relations between the two countries.