Development of Turkmen-Chinese trade and economic cooperation is a priority 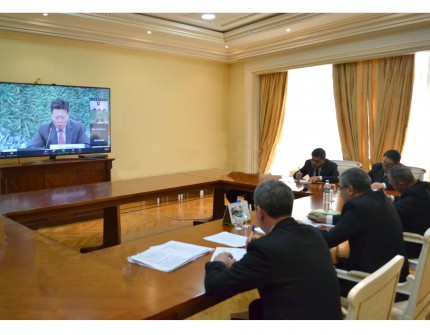 On October 15, 2020, the VI Meeting of the Turkmen-Chinese Subcommittee on Trade and Economic Cooperation of the Intergovernmental Turkmen-Chinese Committee on Cooperation via videoconferencing was held. The Turkmen delegation was headed by the Deputy Minister of Trade and Foreign Economic Relations of Turkmenistan K. Kurbanov, the Chinese side was represented by Yu Jianhua, Deputy Minister of Commerce and Deputy Representative of China in international trade negotiations.

During the constructive meeting, which was being held in this format for the first time, the parties considered a wide range of bilateral interaction based on the strategic partnership of the two states. In particular, an exchange of views took place on expanding and strengthening ties in areas of mutual interest, including the development and improvement of online platforms for further meetings of representatives of the relevant structures of Turkmenistan and China.

From this perspective, the spheres of transport, trade, energy, building materials, chemical and textile industries, agriculture, as well as the area of ​​telecommunications and advanced information technologies, digital commerce were identified as promising areas of bilateral interaction.

As is known, for many years China has firmly held the leading positions among the foreign partners of Turkmenistan, and this is due to the stable macroeconomic situation, including the favorable investment climate in Turkmenistan.

The parties also focused on the need to increase the dynamics of mutual trade by using the huge potential of the economies of the two countries. In this context, mutual interest was expressed in enhancing business contacts between the state and private circles of Turkmenistan and China, which will expand the entire spectrum of cooperation.

The participants also exchanged views on the global coronavirus situation, which requires general coordination and efforts of the international community to minimize the socio-economic consequences and resolve other related problems of the pandemic.

During the meeting, the parties agreed to determine the time and place of the 7th meeting of the Turkmen-Chinese Subcommittee on Trade and Economic Cooperation in accordance with the protocol.