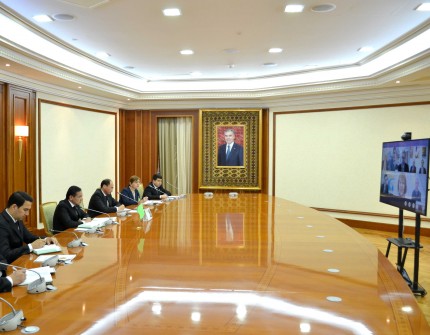 On November 13, 2020, a Turkmen-British trade-economic meeting was held in the format of a video conference.

The meeting was attended by the Minister of Finance and Economy of Turkmenistan M.Serdarov, Chairman of the State Bank for Foreign Economic Activities R.Jepbarov, Chairman of the State Committee for Water Resources G.Bayjanov, and from the British side - Trade Envoy of the Prime Minister of Great Britain in Turkmenistan Baroness Nicholson, Ambassador Extraordinary and Plenipotentiary of the United Kingdom of Great Britain and Northern Ireland to Turkmenistan Hugh Stanley Philpott and Managing Director of JCB Sales Limited Den Thompstone.

At the meeting, the parties discussed issues of further building up and deepening the bilateral partnership of the two countries in priority areas. In particular, the issues of trade, economic and financial cooperation in various sectors of the economy, as well as the possibilities of strengthening business cooperation were considered.

In addition, during the meeting, the British side expressed interest in strengthening cooperation between the business circles of Turkmenistan and the UK, including the participation of British companies in joint projects. They also discussed trade proposals for the development and increase of trade between the two states.

At the end of the meeting, the parties expressed confidence that the constructive exchange of views that took place would give a new impetus to the development of dialogue between the countries in the economic sphere.