Turkmenistan will continue to cooperate with Afghanistan on security issues 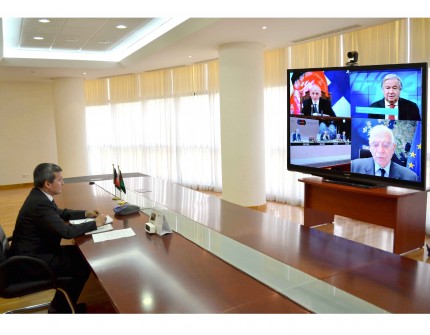 On November 24, the high level meeting on peace, development and security was held in the framework of the Conference on Afghanistan.  The Conference has started the day before in Geneva in the online format under the chairmanship of the Governments of the Islamic Republic of Afghanistan and the Republic of Finland in cooperation with the United Nations. This Conference takes place every 4 years.

Turkmenistan is represented at this event by the Deputy Chairman of the Cabinet of Ministers, Minister of Foreign Affairs of Turkmenistan R. Meredov.

The parties assessed the existing and potential threats to regional and global security, as well as the current level of cooperation.

In this context, the commitment of the Turkmen side was expressed to assist in the fight against international terrorism, drug trafficking, cross-border crime, for which, as noted, a cohesive and strategic approach is needed. The effectiveness of the Turkmen-Afghan partnership in this area was emphasized; in particular, the effective work of the Joint Turkmen-Afghan Commission on Security Cooperation was highlighted.

The call of Turkmenistan to expand regional and global interaction against the background of the growing risk of radical terrorism was voiced. In this regard, the commitment of Turkmenistan to the implementation of the UN counter-terrorism strategy at all levels: global, regional and national was emphasized. It was also noted that Turkmenistan welcomes and supports the involvement of Afghanistan in all regional actions on security issues.

As known, Turkmenistan supports the inter-Afghan negotiations, which started in Doha on the restoration of peace in Afghanistan, and expresses conviction in the effectiveness of diplomatic and political instruments and is also ready to assist the negotiation process by providing its political space. R. Meredov noted that the Turkmen side views this process as the beginning of the establishment of permanent peace in Afghanistan, and is an important step towards strengthening regional peace and sustainable security.

The head of the Turkmen Foreign Ministry clearly outlined three areas that the Government of Turkmenistan considers as integral in the establishment of peace in Afghanistan. These are political mechanisms, the involvement of Afghanistan in the processes of the world economy and humanitarian assistance.

In this regard, the commitment of Turkmenistan to all-round assistance to the people of Afghanistan was confirmed.

It is important to note that the Governments of Turkmenistan and Afghanistan maintain an active dialogue, which obviously makes an important contribution to the development of bilateral and regional cooperation in achieving peace, stability and security.