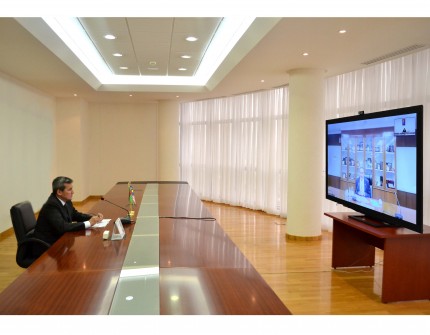 During a constructive conversation, the heads of the foreign affairs agencies of the two countries discussed a wide range of issues of multilateral and bilateral cooperation in the political-diplomatic, trade-economic, energy and humanitarian fields. They reaffirmed the mutual disposition to further build up contacts within the framework of authoritative international organizations, primarily the UN.

In order to implement the agreements reached during a telephone conversation between President of Turkmenistan Gurbanguly Berdimuhamedov and Prime Minister of Malaysia Muhiddin Yassin, held on October 27 this year, the ministers spoke in detail about the pressing issues of the bilateral agenda.

In this context, the diplomats expressed the need to intensify interaction in the oil and gas sector, where there is a huge potential for joint implementation. The positive experience of cooperation with Malaysian companies specializing in oil, gas and energy was noted. The possibilities of building up partnerships between the parties in the field of information and communication technologies and digitalization of the economy were also considered.

The humanitarian component of the Turkmen-Malaysian relations was especially noted, where the parties have extensive experience and solid potential for deepening effective cooperation in education, science and culture, as well as in the field of health.

Mutual interest was also expressed in enhancing contacts between representatives of public and private structures of the two countries for holding joint events contributing to the strengthening and expansion of bilateral contacts between Turkmenistan and Malaysia in all areas of interest.