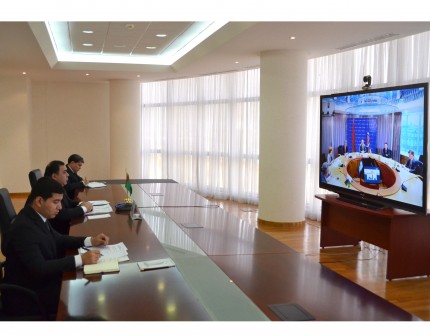 Today, on November 27, political consultations were held between the Ministries of Foreign Affairs of Turkmenistan and the Republic of Belarus in the format of a video conference.

The parties discussed a wide range of issues regarding political-diplomatic, trade-economic and cultural-humanitarian cooperation between the two countries.

The effectiveness of the partnership between the foreign affairs agencies was emphasized. The diplomats highly appreciated the level of cooperation within the framework of the current Program of Cooperation between the Ministries of Foreign Affairs and exchanged views on the future Program for 2021-2022.

Mutually acceptable cooperation within the framework of regional and international structures, in particular the UN, was noted. Gratitude was expressed to the Republic of Belarus for joining the Group of Friends of Neutrality and for co-sponsoring the UN General Assembly Resolution “The Role and Significance of the Policy of Neutrality in Maintaining and Strengthening International Peace, Security and Sustainable Development”.

The diplomats discussed issues related to the legal framework of bilateral relations, exchanged views on its improvement.

Trade and economic relations are considered in detail, including the possibilities of increasing trade turnover. The sides spoke in favor of intensifying commercial contacts between the business circles of Turkmenistan and Belarus. In this context, the role of the Intergovernmental Turkmen-Belarusian Commission on Economic Cooperation was highlighted.

The parties discussed cooperation in the cultural and humanitarian direction. The positive experience of interaction in the fields of healthcare, education, and science is underlined. Mutual interest was expressed in organizing cultural and scientific exchanges.