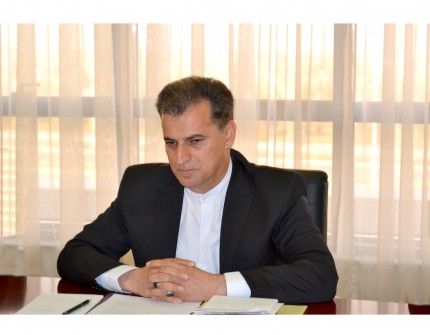 On the 2nd of December 2020, a meeting took place in the premises of the MFA of Turkmenistan between the Minister of Foreign Affairs of Turkmenistan Rashid Meredov and the Ambassador Extraordinary and Plenipotentiary of the Islamic Republic of Iran in Turkmenistan Golam Abbas Arbab Khales.

During the meeting, the head of the MFA of Turkmenistan conveyed to the Ambassador the letter of condolences addressed to the Minister of Foreign Affairs of the Islamic Republic of Iran in connection with the death of the Iranian leading scientist, Head of the Research and Innovation Organization under the Ministry of Defense of Iran Mohsen Fakhrizadeh, as a result of the attack on his life.

In the letter, it is particularly said that Turkmenistan strongly condemns this crime and, referring to the main principles of the United Nations Charter, emphasizes that any forms of violence, and especially those that lead to human casualties, are gross violations of national and international law, a violation of high humanistic values.