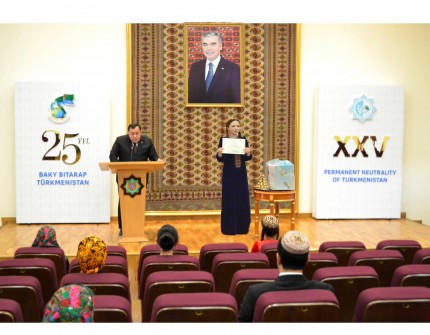 The ceremony that was organized on the threshold of the New Year was attended by the leadership of the Ministry of Foreign Affairs of Turkmenistan and the editorial office of “Nesil” newspaper, the winners of the competition and representatives of the mass media.

Inspired by the words of the President of Turkmenistan Gurbanguly Berdimuhamedov, “the notions - people and the motherland – should as a unique hymn be the motto of the youth,” the Ministry of Foreign Affairs of Turkmenistan together with the editorial office of the “Nesil” newspaper held a creative contest “My Homeland – permanently Neutral Turkmenistan.”

The main purpose of the competition was to reflect the uniqueness of the legal status of the Turkmen model of Neutrality in 2020 which had the slogan “Turkmenistan - the Home of Neutrality,” as well as to demonstrate its international and regional significance and to allow the youth to express their views about the positive neutrality policy. Also to highlight the role of neutrality policy for sustainable development, sustenance of peace and security, tell more about the state policy of the head of state, and to develop the talents of young people and inspire them to new creative pursuits and high achievements.

The high humanitarian initiatives of the President of Turkmenistan which encompass the interests of all mankind and seek the provision of peaceful and happy life of the people of the world are widely supported by the international community. At the same time, the youth plays an important role in the overall advancement of humanitarian goals aimed at global stability, security and solidarity through the policy of permanent Neutrality carried by the President of Turkmenistan.

The winners of the creative contest “My Homeland – permanently Neutral Turkmenistan” expressed their gratitude to the organizers of the competition and thanked the President of Turkmenistan Gurbanguly Berdimuhamedov for his support and concern about the youth.