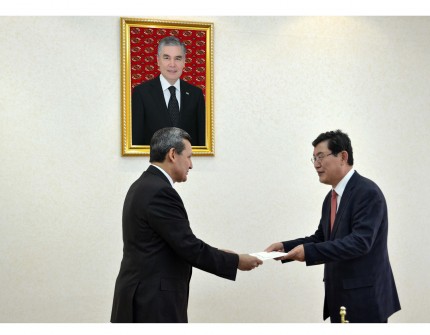 On the 5th of January 2021, the Minister of Foreign Affairs of Turkmenistan Rashid Meredov met with the newly appointed Ambassador of the Republic of Korea to Turkmenistan Shin Sung-chul.

In the beginning of the talk, R.Meredov congratulated the Ambassador with the appointment to the responsible post and wished him new successes and accomplishments in his mission aimed at the development of Turkmen-Korean cooperation.

The diplomats underlined the intensification of bilateral dialogue between Turkmenistan and Korea on high and the highest levels. It was stated that the regular contacts of the heads of states give vast impulse to the enhancement and strengthening of effective collaboration.  Thus, in his video statement at the International Forum for Northern Economic Cooperation which was held in Seoul in a format of a videoconference in October of 2020, the President of Turkmenistan expressed the main standpoints of the Turkmen government on expanding the bilateral and multilateral formats of cooperation.

During the current conversation, the positive experience of collaboration within the international platforms, primarily the UN was underlined.  The diplomats discussed the prospects of the development of ties between Turkmenistan and the Republic of Korea in trade-economic and investment spheres.  The efficiency of multiyear presence of leading Korean companies such as “Hyundai Engineering” and “LG International” on the Turkmen market was stated.  The opportunities of widening cooperation in the area of IT infrastructures, energy and leading technological solutions were also discussed.

The necessity of intensifying the contacts between the parliamentarians, scientific communities and business structures was expressed.  The importance of the “Central Asia-Korea” Cooperation Forum and the “Korea-Central Asia Business Council” was underlined.

The parties spoke for the expansion of cooperation in the area of education, science and healthcare.  The importance of the King Sejong Korean Educational Center in Turkmenistan was stated.

In the framework of the meeting, Ambassador Shin Sung-chul presented the copies of his credentials to the Minister of Foreign Affairs of Turkmenistan.  The parties expressed assuredness in the development of mutually beneficial partnership in all the areas of mutual interest.