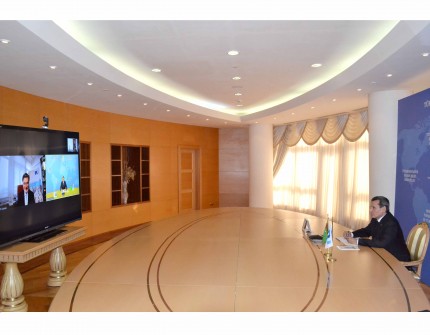 On the 3rd of February 2021, a videoconference was held between the Minister of Foreign Affairs of Turkmenistan Rashid Meredov and the Secretary General of the International Road Transport Union (IRU) Umberto de Pretto.

During the constructive conversation, the parties discussed a wide range of issues of collaboration aimed at the enhancement of connectivity between the countries through the development of transport-transit corridors, sophisticated logistics and digitalization. The success of the First Global Conference on Sustainable Transport held in Ashgabat in 2016 was noted.

Umberto de Pretto highly appraised the commitment of the Government of Turkmenistan to improve the infrastructure in the country and in the region, which is not limited only to the road transport. It was stated that IRU welcomes the work of Turkmenistan not only on constructing the powerful and modern infrastructure, but also on the establishment of conditions for the promotion of its efficient use by joining the international conventions and treaties.

In this regard, the parties highly appraised the collaboration between Turkmenistan and IRU on the United Nations platform that is reflected on the advancement of relevant documents in 2014, 2015 and 2017 on the development of transport and transit routes. Taking into consideration the global pandemic, the parties discussed the possibilities of joint work on the advancement of Turkmenistan’s initiative on the provision of stable international transport in emergency situations.

The Secretary General of IRU expressed adherence to collaboration with Turkmenistan in the process of practical use of the Lapis-Lazuli route, as well as other transport and transit corridors on the North-South and East-West directions. The parties also spoke about the issues related to the preparation to the Ministerial Conference on Transport for Landlocked Developing Countries planned to be held in Turkmenistan in 2021.