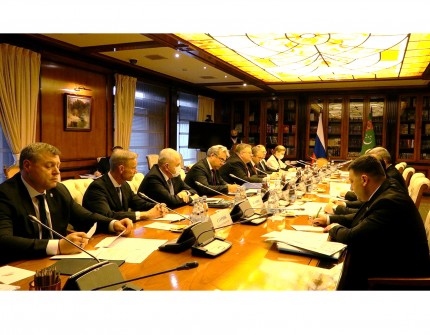 On March 30, 2021, a working meeting of the Intergovernmental Turkmen-Russian Commission on Economic Cooperation was held in Moscow.

During the session, the current state and prospects of further cooperation of two countries in economic, trade, cultural-humanitarian and other fields was considered.

The Co-chair of the Intergovernmental Commission from the Turkmen side, Deputy Chairman of the Cabinet of Ministers R.Meredov and the Deputy Chairman of the Cabinet of Ministers S.Berdimuhamedov have noted in their speeches the vast potential opportunities present for the expansion of cooperation between the two countries. In particular, it was stated that one of the main vectors of interstate collaboration is the partnership pf Turkmenistan with the regions of Russia.  In this regard, it was proposed to activate this segment of cooperation.  In addition, the importance of bilateral contacts in the area of digital technologies was underlined.

With the aim of further enhancement of the work of the Intergovernmental Commission, it was recommended to activate cooperation of the Turkmen-Russian and Russian-Turkmen Business Councils with the involvement of the business circles of two countries to their work.

During the session, that was attended by the Members of Governments of two countries and the high-ranking representatives of state structures, a comprehensive exchange of views on cooperation in the following areas took place:

Special emphasis was made on the partnership in the area of science and education.

Upon the outcomes of the working session, important intergovernmental and interdepartmental documents were signed.