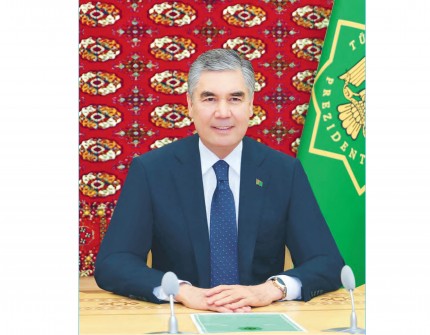 On the 16th of June 2021, the President of Turkmenistan Gurbanguly Berdimuhamedov participated to the work of the Second Summit on Science and Technology of the Organization of the Islamic Cooperation (OIC) held under the chairmanship of the Government of the United Arab Emirates via videoconferencing.

The Summit entitled “Science, Technology and Innovation: Opening New Horizons” was attended by the heads of states, leadership of profile ministries and other relevant structures of the OIC Member States. The agenda of the forum included further cooperation in the field of science and technology, as well as the fulfillment of OIC Program on these subjects till 2026.

In the beginning of his speech, President Gurbanguly Berdimuhamedov thanked the Secretary General of the Organization of the Islamic Cooperation Dr. Yousef Bin Ahmad Al-Othaimeen for organizing the Summit. The head of Turkmenistan underlined the relevancy of the current meeting’s theme in view of the unprecedented breakthrough in the area of information technologies and the urge for joint scientific researches in the fields, which pose significant interest for the whole humanity.

President Gurbanguly Berdimuhamedov drew the attention of the participants to the need of expanding close cooperation for the development of fundamental science, joint search for efficient scientific solutions, and development of methods for the exchange of results of essential studies especially in the medical and healthcare spheres. This initiative implies the establishment of the Network of Scientific and Research Centers of the OIC, which will form the scientific and technological potential of the Islamic world and will provide an opportunity to exchange data between the scientific societies of the Member States.

Then, the President of Turkmenistan has proposed to accelerate the process of development of a unified concept or main guidelines on water, food and ecological safety on the OIC space, which is clearly stipulated in the Program of Scientific and Technical Cooperation until 2026.

“The absence of certain conceptual documents in such important spheres does not allow us to address the existing complicated issues such as the equal provision of water resources and strategic food products, as well as overcoming of the negative impacts of the climate change and ecological catastrophes”, noted President Gurbanguly Berdimuhamedov.

The head of Turkmenistan confirmed the strong commitment of the country to consolidation and expansion of international efforts against contemporary ecological threats. It was underlined that Turkmenistan has stated the need for adopting measures on the development of low carbon energy, as well as the arrangement of a Global Strategy under the United Nations auspices aimed at the creation of a Roadmap for the development of hydrogen as one of the priority vectors in the energy sphere.

In this respect, the head of the state has expressed confidence in that the solidarity of the Islamic world in implementation of international initiatives in these fields is expected to contribute to the achievement of missions outlined in the 2030 Global Agenda for Sustainable Development by each of the OIC Member States.

Besides, in view of the current world tendencies, the President of Turkmenistan underlined the necessity of establishing joint structures of secure digital economy, that is the formation of reliable systems in certain countries and large regions, including a single data register on the basis of high-performance computerized centres of the OIC Member States as proposed by the Permanent Committee for Science and Technologies. It was stated that Turkmenistan is ready to consider the possibility of providing its national capabilities for provision of place and operation of such centers.