Official visit of the President of Afghanistan to Turkmenistan 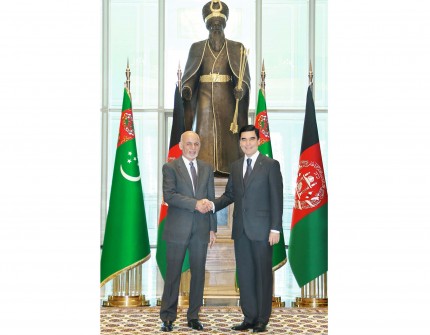 On July 3, 2017 President of the Islamic Republic of Afghanistan Mohammad Ashraf Ghani arrived in Ashgabat on an official visit. This visit is intended to be another important step on the way to further strengthening and developing traditionally friendly interstate relations.

After the official ceremony of the meeting of the President of Afghanistan Mohammad Ashraf Ghani in the Oguzkhan Palace Complex, the leaders of the two countries held one-to-one negotiations.

Then the talks continued in an expanded format with the participation of the members of the official delegations of the two countries. Issues of regional security and bilateral cooperation were on the agenda of the ongoing Turkmen-Afghan talks.

Particular importance in this context was attached to the Turkmenistan-Afghanistan-Pakistan-India gas pipeline. The implementation of such a large-scale project will have a positive impact on the socio-economic development not only of the member countries, but of the states of the whole region. It can form the most important condition for the improvement of the situation and security in Central and South Asia.

The trade and economic sphere is one of the priority areas of bilateral cooperation. During the Turkmen-Afghan talks, issues of cooperation in the humanitarian sphere were discussed. Turkmenistan intends to continue assisting the neighboring state in the training of qualified national personnel of various specialties, training Afghan students.

As a result of the Turkmen-Afghan high-level talks held in Ashgabat, bilateral documents were signed. Following the talks, Presidents Gurbanguly Berdimuhamedov and Mohammad Ashraf Ghani signed a Joint Statement.

The following documents were signed: the Program of Cooperation between the Ministries of Foreign Affairs of the two countries for 2018-2019; Memorandum of Understanding on cooperation in the carpet industry; Agreement on international road transport; Agreement on an international railway crossing point on the Turkmen-Afghan border; Rules for the organization of rail transport between Imamnazar and Akina border stations; An agreement on cooperation between the Ministry of Energy of Turkmenistan and the Ministry of Energy and Water Management of the IRA on the supply of Turkmen electricity to the Afghan provinces of Badghis and Jawzjan, as well as the Agreement on Cooperation in the Scientific and Educational Sphere between the Turkmen State University named after Makhtumkuli and the University of Afghanistan's Jawzjan province.

Following the talks, Presidents Gurbanguly Berdimuhamedov and Mohammad Ashraf Ghani held a briefing for journalists. The parties reaffirmed their commitment to the peaceful settlement by political means of all emerging disputes and conflicts. It was stated that in order to combat international terrorism, extremism, illicit drug trafficking, cross-border crime, cooperation in this direction will continue.

The need to implement with the participation of the Afghan side of large infrastructure projects, including in the field of energy and transport, was noted. The actual topic of the talks was the supply of Turkmen electricity to Afghanistan.

President of Turkmenistan invited the President of Afghanistan to the opening ceremony of the Asian Games-2017. We treat these Games not only as major international competitions, but as an event designed to strengthen the relations of friendship and brotherhood, cooperation between the countries and peoples of Asia, President Gurbanguly Berdimuhamedov said.

In the second half of the day, the President of the Islamic Republic of Afghanistan visited the Memorial Complex "Halk Hakydasy", which perpetuated the memory of national heroes - defenders of the Fatherland, as well as the victims of the devastating Ashgabat earthquake of 1948, where he laid flowers at the "Baky Şöhrat" monument.

After the solemn reception the two heads of state warmly said goodbye to each other, and then Mohammad Ashraf Ghani proceeded to the International Airport of the Turkmen capital from where he left Ashgabat.