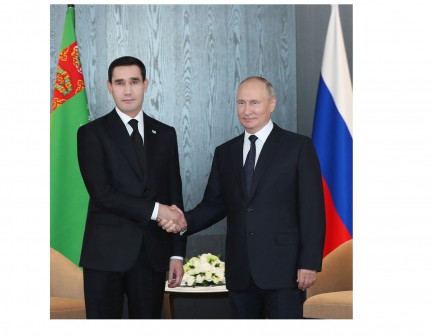 On September 15, 2022, President Serdar Berdimuhamedov, who arrived in Samarkand to participate as an honored guest at the SCO Summit, met with the President of the Russian Federation, Vladimir Putin.

After exchanging warm greetings, the heads of the two states expressed satisfaction with the opportunity in a personal conversation to discuss topical issues of further development of Turkmen-Russian relations based on long-standing ties of friendship and good neighborliness, the principles of equal and mutually beneficial partnership.

In April this year, the 30th anniversary of the establishment of diplomatic relations between our countries was celebrated, the President of the Russian Federation said, stating that the level of strategic partnership that has developed and is recorded in the relevant documents is confirmed in practice.

Expressing gratitude to the Russian leader for the opportunity to meet within the framework of the Shanghai Cooperation Organization Summit, President Serdar Berdimuhamedov conveyed warm greetings to him on behalf of the Chairman of the Halk Maslakhaty of the Milli Gengesh of Turkmenistan Gurbanguly Berdimuhamedov.

In this regard, the head of state noted with satisfaction the high level of the Turkmen-Russian political dialogue, which is confirmed by mutual visits and high-level meetings.

As President Serdar Berdimuhamedov noted, the progressive development of bilateral relations is fully facilitated by systematic contacts at the government level, as well as regular consultations between the Ministries of Foreign Affairs.

A constructive character is inherent in the cooperation of the two states within the framework of authoritative regional and international organizations. In this regard, the head of Turkmenistan expressed his gratitude to his Russian colleague for the continued support of the neutral foreign policy of our country and the initiatives put forward by it in the UN and other international structures.

In the mutual opinion of the parties, a fruitful cultural and humanitarian dialogue occupies a special place in interstate relations. Thus, in order to deepen long-term ties in the field of education, the issue of opening a Turkmen-Russian university in Ashgabat is currently being considered. Much is being done in terms of cooperation in the field of culture.

At the end of the meeting, Presidents Serdar Berdimuhamedov and Vladimir Putin, expressing confidence that the traditional Turkmen-Russian relations would continue to grow and develop successfully, exchanged best wishes for each other and the friendly peoples of both countries.