Political consultations between Turkmenistan and the Republic of Iraq 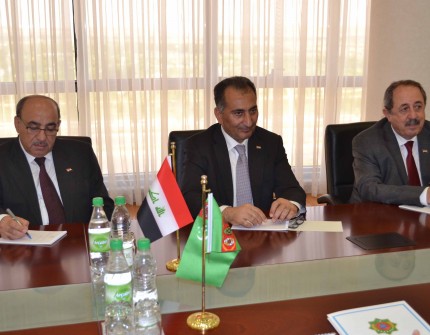 On July 25, 2017, at the Ministry of Foreign Affairs of Turkmenistan there were political consultations between Turkmenistan and the Republic of Iraq at the level of deputy foreign ministers. The delegation of the Iraqi side was led by Deputy Foreign Minister Nizar Issa Abdul-Hadi Al Khairallah.

During the consultations, the sides focused on expanding bilateral cooperation in various areas. An exchange of views took place on topical issues of regional security and cooperation. The sides noted a comprehensive commitment to the development of cooperation in the field of combating terrorism and the causes of its emergence within the framework of international organizations, including through the exchange of information.

The sides discussed the current state of relations and outlined directions for their further expansion. Among the priority areas were noted the political and diplomatic cooperation between Turkmenistan and the Republic of Iraq. In this context, the Iraqi side expressed support for the policy of positive neutrality of Turkmenistan and expressed interest in developing cooperation within the framework of international organizations, of which the UN and OIC are priority ones.

Within the framework of the talks, the sides discussed the possibilities of developing trade and economic cooperation and establishing direct contacts between the entrepreneurs of the two countries. The parties agreed to analyze the current state of the legal basis for the relationship. Among the areas of interest, the parties noted the energy sector.

Discussing the cultural and humanitarian bloc, the Turkmen side noted the interest in intensifying scientific cooperation through the participation of Iraqi scientists in the work of various scientific conferences in Turkmenistan.