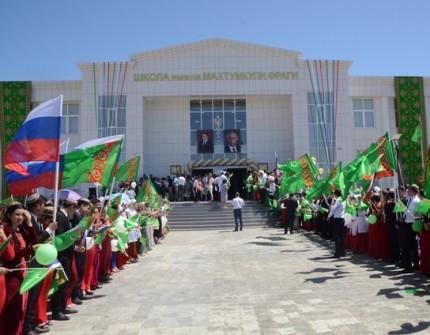 On May 18, 2018, the delegation of Turkmenistan headed by Deputy Chairman of the Cabinet of Ministers, Minister of Foreign Affairs of Turkmenistan R. Meredov visited Astrakhan Region.

On arrival in the city of Astrakhan, Minister of Foreign Affairs R. Meredov met with the Governor of the Astrakhan Region A. Zhilkin. During the meeting, the sides discussed cooperation in the fields of economy and trade, transport, shipbuilding, education and science. It was stressed that in recent years relations between the two countries have been developing actively not only in the federal but also in the regional format and the Astrakhan region occupies a special place in it.

On the same day, a solemn ceremony of opening a new school in the village of Funtovo of the Municipal formation "Privolzhsky District" of the Astrakhan region was held.

The construction of the school in Funtovo began in March 2016 on the initiative of the President of Turkmenistan Gurbanguly Berdimuhamedov. The educational institution will bear the name of the Turkmen poet, classic of world literature Makhtumkuli Fragi. The school is fully built by the Union of Industrialists and Entrepreneurs of Turkmenistan. To this end, the best experts in the construction industry were sent from Turkmenistan to Astrakhan, construction materials were delivered by a passenger transport ferry across the Caspian Sea.

The place for the new school is not chosen randomly. The village of Funtovo is home to the largest Turkmen Diaspora in the Astrakhan region. The school building is a 2-storey educational complex with a total area of ​​over 3, 5 thousand square meters and is designed for 190 pupils. It has spacious modern classrooms, laboratories, all conditions for sport and creativity.