Turkmenistan and Guinea-Bissau discussed opportunities for development of bilateral cooperation 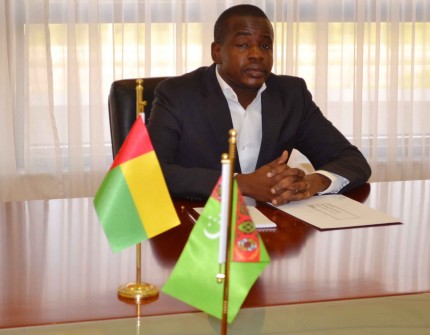 On June 8, 2018, at the Ministry of Foreign Affairs of Turkmenistan there was a meeting with the Ambassador Extraordinary and Plenipotentiary of the Republic of Guinea-Bissau to Saudi Arabia, Mr. Mamadou Sano, who arrived in Ashgabat on a working visit.

During the exchange of views on strengthening cooperation, the sides discussed the possibilities of developing cooperation in the political-diplomatic, trade-economic and cultural-humanitarian spheres. The prospects of further cooperation within the framework of international organizations were also considered.

The Turkmen side proposed to establish permanent bilateral contacts between the foreign ministries of the two countries. In this context, it was stressed that the holding of political consultations on an ongoing basis will give impetus to the development of not only bilateral political, but also trade-economic and cultural-humanitarian relations.

At the end of the meeting, the sides noted the need to bring bilateral ties to a higher level, which meets the long-term interests of the two countries.