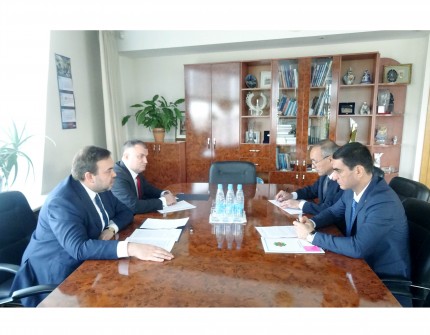 On October 9, 2018, political consultations were held between Turkmenistan and the Republic of Belarus at the premises of the Ministry of Foreign Affairs of the Republic of Belarus in Minsk. The Turkmen delegation was headed by Deputy Minister of Foreign Affairs V.Hadzhiev, and the Belarusian delegation was headed by Deputy Foreign Minister E.Shestakov.

During the consultations, the sides discussed a wide range of issues related to the expansion and development of fruitful cooperation between Turkmenistan and the Republic of Belarus, including trade and economic cooperation, agriculture, health, oil and gas, physical education and sports, as well as other issues of interstate cooperation. In addition, issues of further development and deepening of cooperation in such areas as science, education, and the cultural-humanitarian sphere were considered.

In particular, during the meeting, prospects for the development of bilateral cooperation in the trade-economic sphere were discussed and specific proposals for their expansion were considered.

In this regard, in order to bring the trade and economic relations between the two countries to a qualitatively new level, the parties reviewed issues related to the next meeting of the Turkmen-Belarusian intergovernmental commission on trade and economic cooperation.