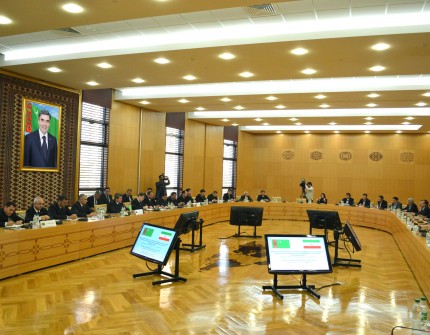 On October 15, 2019, the 15th meeting of the Intergovernmental Turkmen-Iranian Commission on Economic Cooperation was held in the premises of the Ministry of Foreign Affairs of Turkmenistan.

The meeting of the Commission was headed by: from the Turkmen side, Deputy Chairman of the Cabinet of Ministers of Turkmenistan, Minister of Foreign Affairs R. Meredov, from the Iranian side - Minister of Roads and Urban Development of the Islamic Republic of Iran M. Eslami.

At the beginning of the meeting, the parties noted with satisfaction the high level of cooperation between Turkmenistan and Iran, based on the principles of equality, good neighborliness, mutual respect and fair cooperation.

An exchange of views took place regarding the implementation of the agreements reached during the previous meeting of the Commission. They considered proposals to deepen cooperation between the relevant ministries and departments of the two countries, as well as expand partnerships between business circles. In this context, the parties reviewed ongoing projects implemented in Turkmenistan with the participation of Iranian companies.

In particular, the heads of delegations specifically addressed pressing issues of interaction in the areas of fuel and energy, transport and communications, customs regulation of goods, trade and economic partnerships, industry, agriculture, water management and engineering developments.

The parties also especially focused on such issues as cooperation between the regions of the two countries, cooperation in science and education, environmental protection, healthcare, tourism development, and also exchanged views on improving the legal framework of bilateral interactions.

Following the results of the meeting of the Intergovernmental Commission a final Protocol was signed.