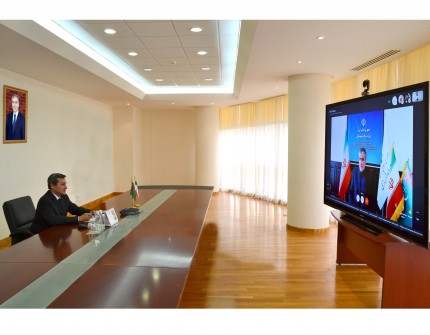 On August 25, 2020, an online meeting was held between the Minister of Foreign Affairs of Turkmenistan Rashid Meredov and the Minister of Roads and Urban Development of the Islamic Republic of Iran Mohammad Eslami.

During the meeting, the Ministers noted with satisfaction the high level of active dialogue between Turkmenistan and Iran, as well as the adherence of the heads of states to further development of cooperation on various vectors.

The parties discussed a number of current issues of bilateral agenda, particularly the collaboration on the promotion of trade-economic ties.  Special accent was made on the development of transport-transit cooperation, sustenance of freight railway communication between the countries.

The Ministers underlined the vital role of the Intergovernmental Turkmen-Iranian Commission on Economic Cooperation in the context of further strengthening of bilateral relations.  The exchange of views took place on cooperation in the field of transport and communication, industry, agriculture and water economy.